Todd Gurley made a strong statement in his bid for a Heisman Trophy.

The Georgia running back, who missed three games last season due to injury, ran 15 times for 198 yards and three touchdowns Saturday – and added a fourth touchdown on a 100-yard kick off return – to lead the Bulldogs to a 45-21 win over the Tigers.

After a third quarter that saw both offenses struggle to generate anything to break a 24-21 Georgia lead, Gurley broke through on an 18-yard-touchdown run – his third of the night – to give Georgia a 31-21 lead, which was the biggest margin in the game at that point, with only 10 minutes remaining.

GIF – Todd Gurley with the rushing TD for the #BullDogs http://t.co/3wC3Me5ItF

That drive completely opened the game up for the Bulldogs, as freshman running back Nick Chudd essentially put the game away minutes later on a 47-yard touchdown run for his first collegiate score. Gurley later added one more touchdown run with 7 minutes remaining.

Clemson opened up the scoring in Athens when running back D.J. Howard ran in from one-yard out on a fourth-and-goal gamble.

The Tigers had the ball inside the 3-yard line on first-and-goal, but the Bulldog defense stiffened and kept the Tigers out of the endzone for three plays before Clemson finally punched it in on fourth down.

Gurley then answered back for Georgia, capping off a 5-play touchdown drive for Georgia on a 23 yard run. Once Gurley hit the outside corner, it turned into a foot race, and no Clemson player came close to catching him.

Georgia took the lead when Hutson Mason, who is attempting to replace former quarterback Andy Murray, put Georgia ahead with 35 seconds left in the first quarter on a two-yard dive for his third career rushing touchdown.

The first quarter is in the books here at Sanford Stadium and the Bulldogs lead the Tigers 14-7! pic.twitter.com/6eGHAxg4fB

Clemson quarterback Cole Stoudt then hit wide receiver Charone Peake, who missed the 2013 season with an injury, over the top of the Bulldog defense for a 30-yard-touchdown to tie the score for his first career touchdown pass.

Clemson retook the lead after a 68-yard drive was capped off on a one-yard touchdown run by Tiger running back C.J. Davidson.

But Gurley responded by returning the ensuing kickoff 100 yards for a touchdown. Gurley just ran right down the middle, marking the first time since 2011 that Clemson has allowed a kickoff to be returned for a touchdown.

Todd Gurley return for 100 yds for a TD – via @ESPN Champ Drive http://t.co/raMhi0KyzD You go Gurley?

Gurley drove the Bulldogs down the field, and Georgia was able to hit a 27-yard field goal to take a 24-21 lead – a lead the Bulldogs never relinquished.

After a disappointing, injury-heavy season last year, Georgia is looking to become one of the bounce-back stories of the season. The Bulldogs have plenty of talent, but will be put to the test immediately when Clemson visits Athens Saturday afternoon in one of the first week’s most intriguing matchups.

Meanwhile, Clemson is coming off a big 2013 season that was capped off by a blowout victory over Ohio State in the Orange Bowl. But if the Tigers are going to come out of Athens with a win, they will need to find a way to contain Georgia running back Todd Gurley, a preseason Heisman candidate who led the Bulldogs with 989 rushing yards and 10 touchdowns in 10 games last season.

Here is a full preview: 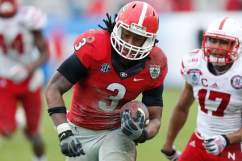 Read More
College Football
Clemson and Georgia battle in one of Week 1's most intriguing matchups.