Hall of Fame golfer Greg Norman says he’s lucky to have his left hand after being injured in a chainsaw accident.

The Shark, who spent 331 weeks as the No. 1 golfer in the world, posted a picture on his Instagram page Saturday of him lying in a hospital bed, letting fans know he was “injured, but not down and out.”

1. Norman Said He’s Lucky to Have His Left Hand

Norman posted this photo Saturday with a caption announcing the injury.

“Working with a chainsaw ALWAYS be respectful of the unexpected,” he wrote. “I was one lucky man today. Damanged, but not down and out. Still have left hand.”

2. Norman Is Out of the Hospital

The morning after the accident, Norman posted a photo (which you can see above) of him standing shirtless near what he called “the seen of the crime,” wearing the same purple guard on his left arm that he was pictured wearing in his hospital bed.

3. Norman Recently Posted a Photo of Himself With a Saw & Wrote ‘Love to Work!’

On September 6, Norman posted what now looks like an ominous photo of himself trimming sea grapes with a saw and a message that read: “Never ask someone to do something that you can do yourself. Love to work!”

4. It’s Not Clear Exactly What Happened to Norman’s Hand

The Shark hasn’t announced exactly what happened during the accident or how seriously he was injured.

The Shark’s Instagram page contains photos of Norman doing everything from riding horses to roasting a pig to summiting a volcano on the Andes Mountains in Chile. 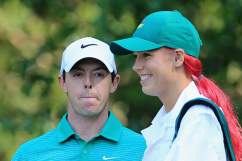