Notre Dame pulls away in second half

After a close first half, Notre Dame pulled away from the Boilermakers in the second half, scoring 20 unanswered points to end the game.

The Irish started the second-half scoring when Golson hit Corey Robinson for a 15-yard touchdown pass. Kyle Brindza then tacked on two field goals – one from 48 and one from 39 – in the fourth quarter, to end the game.

After Notre Dame scored just minutes into its opening drive, the Irish have struggled to move the ball against a tough Purdue defense.

The Boilermakers took a 14-10 lead in the second quarter before Notre Dame quarterback Everett Golson scored shortly before halftime on a quarterback sneak to give Notre Dame a 17-14 lead at halftime.

After shutting out Michigan 31-0 last week, Notre Dame will look to improve to 3-0 for the second time in three years – a feat the Irish haven’t accomplished since a four-year run of opening at 3-0 from 1987-90.

But in order to get there, Notre Dame will need to get by in-state rival Purdue at a neutral site game at Lucas Oil Stadium in Indianapolis. Even though, on paper, Notre Dame will enter as a heavy-favorite, Purdue always plays the Irish tough, and could upset a Notre Dame coming off a huge win.

Following back-to-back 31-point victories, Notre Dame is on the verge of cracking the top 10. That kind of move would likely ignite talk of Notre Dame being back in the national championship mix.

Meanwhile, Purdue is looking for its first signature win under second-year coach Darrell Hazell and a chance to regain some confidence. And while the Boilermakers’ enter the game with several question marks, only two teams (USC and Michigan State) have beaten the Irish more than Purdue has. And after Saturday’s game, the series, which began in 1896, goes on a five-year hiatus.

Notre Dame’s defense looked extremely tough against Michigan last week, and Purdue’s offense doesn’t possess any real threats to the Irish. In what will be a close, low-scoring game early on, the Irish offense will pull away at the end. 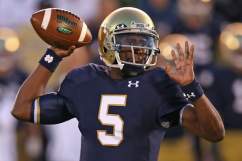