Just when it looked like Derek Carr would lead the Raiders to a last-minute, game-tying touchdown Sunday against the Patriots, New England escaped with a win when nose tackle Vince Wilfork caught a tipped pass for a game-clinching interception.

The interception came one play after a holding penalty on Oakland nullified a 6-yard touchdown run by Darren McFadden that would have tied the game coupled with an extra point.

The Raiders looked poised to tie it after a 24-yard pass interference penalty on New England’s Logan Ryan gave Oakland the ball at the Patriots 6-yard-line with 1:02 left.

New England won 16-9 and escaped with its second win despite scoring only one touchdown. Oakland fell to 0-3. 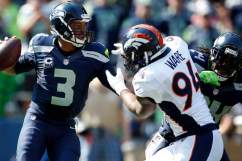