Everyone who’s on the air during ESPN’s College GameDay is greeted with fanfare at every stop the show makes, and Samantha Ponder, one of the network’s most popular reporters, is a case in point. Ponder has made a name for herself over the past four years, first as a reporter at the fledgling ESPN-owned Longhorn Network, then as a sideline reporter on ESPN college football and basketball broadcasts and a correspondent on GameDay.

But on the two occasions this year on which GameDay has taken its road show to Doak Campbell Stadium at Florida State, Ponder has been a unique attraction: She’s both a marquee ESPN personality and the wife of a prominent former Seminole: Ex-‘Noles quarterback Christian Ponder, who’s now a backup with the Minnesota Vikings.

Read on for more about the Ponders, their relationship and the newest member of their family.

Unlike many couples that include an athlete and a reporter — CBS’ Jenny Dell and the Red Sox’s Will Middlebrooks come to mind — the Ponders’ relationship didn’t develop with the reporter covering the athlete.

So how did their relationship start?

In a 2013 interview with the St. Paul Pioneer Press’ Bob Sansevere, Samantha said she was living in Austin and working for the Longhorn Network when Christian started sending her Twitter messages.

Here’s how Samantha described the courtship:

He started sending me messages on Twitter. I’m like, “Why is this old Florida State quarterback messaging me? This is weird.” He was always asking me random questions about living in Austin. Nothing creepy, but that was our original connection. Our version of Christian Mingle was on Twitter.

2. Christian Proposed With a Christmas Lights Display at His House

Samantha told the Pioneer Press she and Christian started dating at some time in 2012, though she doesn’t remember the exact date. By December of that year, Christian was ready to pop the question.

He picked me up from the airport. I was coming in for just a few hours. He took me back to his house. This was the first week in December. I noticed there were some lights outside. I was like: “Oh, cool. You put Christmas lights outside.” He was like, “You should go look at it.” It was December in Minnesota, and I’m from Phoenix. I’m like: “Dude, I’m not going outside. I don’t want to look at your lights. It’s freezing.” He said, “You should go look.” I said, “No, I’m good.” He’s like, “Seriously, you should go look.” I was arguing with him. I’m like: “No. Don’t tell me what to do. I’ll look at the lights in the morning.” I was being the brat that I am. Then it clicked in my head. So I walked outside, and I look over to the balcony area and he put “Marry Me” in Christmas lights into the ground. He didn’t put a question mark. It was more of a command, like “Marry Me!” I don’t know if I had an option. I turned around, and he was on his knee and asked me. I don’t even remember what he said. It was all kind of a blur. We decided to get married two weeks later. 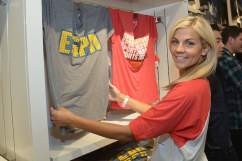 3. Samantha & Christian Had Their Post-Wedding Meal at Arby’s

Rather than throw a lavish ceremony, the two decided to hop in the car and drive to Wisconsin to get married in a civil ceremony without even having told their parents. Samantha said the two had their post-wedding meal at an Arby’s, then attended an “ugly sweater” Christmas party held by a couple of Vikings offensive linemen.

From the Pioneer Press:

I never was really a girl who planned out what my wedding would be, what my dress would look like. Everybody’s different. When we got married, he picked me up at the airport and I was wearing jeans and a sweatshirt and a hat. We drove the 20 minutes to Hudson or whatever it was, walked in, got married. Then we went and ate Arby’s as our wedding meal. We get way more attention than we ever deserve or need or want, because of our jobs. I don’t need a day that’s all about me. I was happy to go get married. That night after we had our Arby’s, we forgot the offensive line had an Ugly Sweater Party at a local restaurant. One of the guys texted Christian and asked, “Dude, where are you at?” We went to the mall and found ugly sweaters and went to the Ugly Sweater Party. We wanted to leave early, but everybody was like, “No, don’t leave.” I’m thinking, “Gosh, we just got married.”

The couple did have a second ceremony and a reception for family and friends. And as Samantha told Entertainment Tonight in an interview you can watch above, she bought the dress for the festivities for $19.

On July 22, 2014 the Ponders welcomed an addition to the family when Samantha gave birth to a baby girl named Bowden Saint Claire Ponder — named after legendary Florida State coach Bobby Bowden, who coached Christian in Tallahassee, and given the same middle name as Samantha.

As ESPN reported in July, Bowden’s parents call her “Scout,” after the young narrator in “To Kill a Mockingbird.”

“It’s crazy to take such a responsibility — you have someone that’s so dependent on you,” Ponder told ESPN’s Ben Goessling. “You’ve got to take care of her and your family. It’s an eye-opening experience, it’s fun and it’s scary at the same time.”

Scout was born less than two months before the start of the college football season, and since Samantha went back to work in time for the first College GameDay show of the year, she decided to take Scout with her on the road.

5. Christian Was Traded to the Oakland Raiders

Ponder rolls out to pass against the Seattle Seahawks at CenturyLink Field on November 17, 2013 in Seattle, Washington. (Photo by Otto Greule Jr/Getty Images)

Ponder was traded to the Oakland Raiders as an unrestricted free agent in March, 2015 after playing backup quarterback for four years on the Minnesota Vikings. Ponder was drafted in the first round (12th overall) of by the Vikings. Ponder and Raiders offensive coordinator Bill Musgrave worked together during Ponder’s first three seasons in Minnesota which should make his transition to Oakland a relatively smooth one.