Is Thursday Night Football Good or Bad?Arian Foster doesn't like playing Thursday nights. Aaron Rodgers does. So who is right? Robert Flores fills in for Keith and explains. Watch "Olbermann" weeknights on ESPN2 at 5pm ET. Get More Olbermann: Follow http://twitter.com/KeithOlbermann2014-10-08T21:29:48.000Z

The Houston Texans are hosting the Indianapolis Colts on CBS’ Thursday Night Football, and Houston’s best offensive player isn’t too happy about it.

Arian Foster unloaded this week on the NFL for forcing players to take the field on such a short turnaround, accusing the league of caring more about revenue than about player safety.

Here’s what Foster had to say. You can watch the clip above via ESPN’s Olbermann show, which was guest-hosted Wednesday by Robert Flores.

Thursday Night Football is putting every player on the football field in danger. Nobody’s ready to play physically after a Sunday game. I think it’s just, ya know, the league’s way of trying to generate more revenue. It’s annoying for players and I don’t know one player that likes it.

As Flores points out, at least one player does in fact like Thursday Night Football: Aaron Rodgers, whose Packers destroyed the division rival Vikings on Thursday night last week at Lambeau Field. 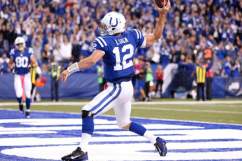 Read More
Football, NFL
The Houston Texans are hosting the Indianapolis Colts on Thursday Night Football, and Arian Foster isn't happy about it.