UAB defensive end Chris Rabb is being investigated by the school after allegations surfaced Friday that Florida State quarterback Jameis Winston shaved points in Florida State’s October 30 game against Louisville to help Rabb get out of gambling debt.

But the latest storyline should be met with a heaping dose of skepticism given the source: A gambling website run by a guy who calls himself Incarcerated Bob and who, according to veteran sports journalist David Purdum, has repeatedly posted bogus stories in the past aimed at gaining him publicity and allowing him to sucker gamblers into paying him for picks.

Despite the extreme likelihood that the original report was bogus, TMZ reported Friday afternoon that the allegations — true or not — caused enough of a stir for UAB to launch an investigation into potential wrongdoing by Rabb, a close friend and high school teammate of Winston.

Here’s what you need to know about Rabb.

1. He Had a Strong Sophomore Season Last Year

Stay puttin on for the Town. pic.twitter.com/7w1FferqfG

As a sophomore last year, Rabb played in 11 games, starting seven, at defensive end for the University of Alabama-Birmingham. He ranked seventh on the team in tackled (35), third for tackles for loss (five) and had three sacks over the course of the season.

2. He First Saw Playing-Time as a Freshman

As a freshman at UAB, Rabb played in all 12 games and started five of them, including the last four of the season. He finished the season with 14 tackles, including eight solo tackles. When the Blazers traveled to South Carolina that season, he had a pair of tackles for loss and two sacks.

3. He Was Winston’s High School Teammate

Man I miss this so much! pic.twitter.com/3wjFwsma

According to a May 2014 Bleacher Report story, Winston and Rabb have been friends since the sixth grade. 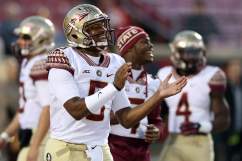 4. There’s no evidence he actually bet $5,500 on the FSU-Louisville game

Citing an anonymous bookie from Alabama, Incarcerated Bob said that Rabb placed a bet of $5,500 bet on Louisville getting 1 point in the first half against Florida State. That means Rabb bet against Florida State, hoping the Seminoles would not be leading by more than a point at halftime. They weren’t. Winston threw 2 first-half interceptions and Louisville led Florida State 21-7 at the break.

We know what happened in the game. We don’t know whether Rabb really bet that much money on the first-half line, but we do know that there’s considerable doubt about the reporting given Incarcerated Bob’s history of being wrong. As the story goes, though, Rabb won $5,000 on the bet, which Incarcerated Bob says was the biggest ever placed by Rabb.

5. There’s No Evidence That Winston Was Shaving Points

The only evidence Incarcerated Bob offers that Winson was shaving points is his closeness to Rabb and his poor play in the first half, and there’s no indication that Florida State or the NCAA are investigating Winston for point shaving. (Calls seeking comment from FSU’s athletic department were not immediately returned Friday.)

TMZ Sports is reporting the FBI “can neither confirm nor deny” an investigation into the claims.

Point shaving is a crime and punishable with up to 5 years in prison. 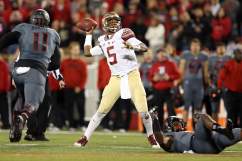