The Eagles and the Cowboys square off Thursday for a Thanksgiving Day NFC East matchup that will determine who takes control of the division. Both teams are tied for the division lead at 8-3.

The last (and first) time these two teams met on Thanksgiving was in 1989, when the Eagles shut the Cowboys out 27-0 in a controversial game that has since been referred to as the “Bounty Bowl.” However, even though Philadelphia is coming off a blowout win against the struggling Titans, they will surely have to bring their A-game on Thursday as Tony Romo has been almost unstoppable on Thanksgiving since 2006 as a starter. Romo is 6-1 (having missed the 2010 game vs. the Saints due to injury, and the single loss against Washington in 2012), with 18 TDs, 6 INTs, 2,033 yards and a QB rating of 107.27 in Thanksgiving games. However, there is no denying that Chip Kelly has turned the Eagles offense into one of the most explosive units in the NFL, and their defense and special teams has 10 TDs on the year, more than any other team in the league.

With only five games left in the regular season, this is a must-win match up for both teams, and the historic and passionate rivalry between the two is sure to produce some hard hits and big plays in this can’t-miss game.

Here’s how to watch …

The game is set for a start time of 4:30 PM EST and will be broadcast on Fox, with Joe Buck and Troy Aikman in the booth, and Erin Andrews on the sideline. It will also be shown on the NFL Network’s RedZone channel for a special Thanksgiving Day broadcast, with regular host Andrew Siciliano.

For those with “The More Everything Plan” from Verizon, NFL games can now be streamed live on the NFL Mobile app for $1.99/month.

The game can also be streamed using the Fox Sports Go app, but only for tablets and computer, as it is not available on phones due to league restrictions.

How to Listen on Mobile 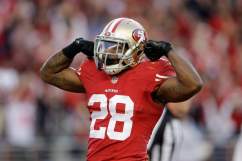 49ers Vs. Seahawks: 5 Fast Facts You Need to Know

Read More
Football, NFL, Thanksgiving
Don't miss a single snap of the Thanksgiving showdown between the rival Dallas Cowboys and Philadelphia Eagles as they battle for NFC East supremacy.