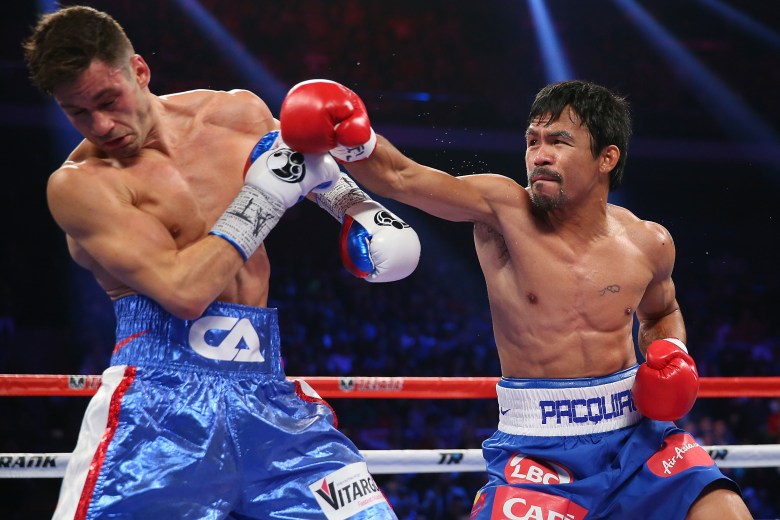 Boxing fans were denied the drama of an upset on Saturday when Manny Pacquiao picked apart the little-known Chris Algieri on his way to a lopsided decision win in their 12-round melee in Macau, China.

Algieri, now 20-1 with 8 KOs, came into the battle undefeated and exuding confidence about his ability to use his speed and timing to dethrone the Filipino legend.

But in the end, the mighty Pacquiao’s power, skill, and experience proved to be too much for the lanky Long Islander, as Manny, now 57-5-2, 38 KOs, handily piled up the points and punishment from the opening bell until the final round.

The pattern of the fight was established early on, with Algieri getting on his bicycle and circling the ring clockwise, and trying to keep Pacquiao at bay with his long reach.

Manny immediately took the role of the hunter, patiently stalking and pressuring the fleet-footed underdog against the ropes, and eventually tallying up six knockdowns on his way to victory.

After the fight, Pacquiao drew even more cheers from the crowd when he told HBO’s Max Kellerman he’d be ready to fight Floyd Mayweather in a dream bout the boxing community has been clamoring for.

Pacquiao then followed up on those comments during his post-fight press conference, essentially challenging Mayweather to fight him.

Point blank, Manny called on Floyd to fight him. Strongest comments he has ever made on it. Said it should be next. #boxing #PacquiaoAlgieri

Both fighters had plenty to prove as they stepped into the ring.

Fans have questioned the 30-year-old Algieri’s legitimacy after his controversial split-decision win over Ruslan Provodnikov, and have asked whether someone as untested should even be in the same ring as the great Pacquiao.

Pacquiao, 35, was coming off victories over Brandon Rios and in his rematch against Tim Bradley. But he has been 2-2 in his last four encounters, including a startling knockout loss to rival Juan Manuel Marquez.

Observers have questioned if the Congressman, who is on a five-year knockout drought, is losing his edge, his dedication, or his killer instinct which have made him one of the most entertaining fighters in the last decade.

By the time the winner was announced at the end of Saturday’s fight, most of these questions had been answered.

The fighters used the opening minute of the bout to test each other. Algieri circled, using his jabbing to judge his distance; Pacquiao observed, feeling out Algieri’s rhythm.

The difference in power was apparent in the first round as Pacman started to work his left hand.

Manny landed a good left a second ago. Still next to nothing from Chris

A right hook caught Algieri’s attention during the second half of the round and Pacquiao took this as an invitation to pick up the pressure.

In between the first and second round, Algieri’s left eye could be seen to already be swelling up.

Both fighters turned up the pace in the second installment as Algieri kept circling the ring and Pacquiao stayed on his trail.

Pacquiao landed a left hand on Algieri’s head, sending the challenger to the canvas for what referee Genaro Rodriguez ruled as a knockdown, despite Algieri having slipped on the wet ring.

Algieri came more spirited in the third round; pumping his jab, putting Pacquiao on his back foot, and landing right hands. The punches Algieri landed had little effect on the feisty southpaw, and actually gave him more confidence to push the fight.

By the end of the round, Pacquiao had put Algieri back in his place.

The following rounds continued to take the same course, with Algieri attempting to take control early in the round but Pacquiao imposing his will on the overmatched palooka.

The sixth round started in the same vein as the others; however, things got more interesting when Pacquiao caught Algieri with a hard left hand that put him on the mat for a second time.

Algieri got up quickly, but Manny smelled blood and pressed the action, resulting in another knockdown and earning him a 10-7 round.

Reaching the half-way point of the fight, Algieri had no solution to the Pacquiao puzzle, and his corner had no answers.

Pacquiao continued to engage as the seventh and eighth rounds passed.

Algieri was willing, but unable to mount any kind of attack to slow down the plotting Pacquiao, who was appearing to be losing interest.

Algieri’s confidence was starting to show in his body language, but Pacquiao put an end to that as a straight left hand earned the Congressman his third knockdown of the fight.

Another knockdown quickly followed. Algieri got up again, but was clearly out on his feet.

Pacquiao went in for the kill, unloading with everything.

Thinking that the referee had waved off the fight, Pacquiao retreated, giving Algieri a chance to catch his bearings and somehow survive the round.

Algieri started the 10th round on wobbly legs as Pacquiao was patiently back on the hunt, pressuring Algieri and looking for an opening to end the bout. Algieri still had the fight in him, but Pacquiao landed a heavy combination and scored another knockdown.

Going into the championship rounds, Algieri was back on the bike and trying to pick up the pace.

In the 12th round Pacquiao continued to give chase, repeatedly catching Algieri with combinations but unable to put the final hurt on.

Algieri showed a lot of defense and running but, ultimately, not much more. His one-dimensional stick-and-move game-plan was ineffective and he, and his corner, were unable to adjust to Pacquiao’s incessant pressure.

By successfully defending his WBO welterweight belt, eight-division title holder Pacquiao puts himself in a possible position to finally make his much- anticipated matchup with Mayweather.

“I think I’m ready to fight him next, next year,” Pacquiao told HBO after the fight. “I really want that fight. ‘The fans deserve that fight.”

Other names being mentioned as possible future opponents have been WBC and WBA junior welterweight champion Danny Garcia, Jessie Vargas (who was on the undercard), and Argentine Diego Chaves (who fights Timothy Bradley in December.)

Could this be the last we hear of “The Chris Algieri Show” in the boxing world? He has repeatedly expressed plans to continue in a career in healthcare after his boxing life is done, and this defeat will give him and his corner plenty to think about.