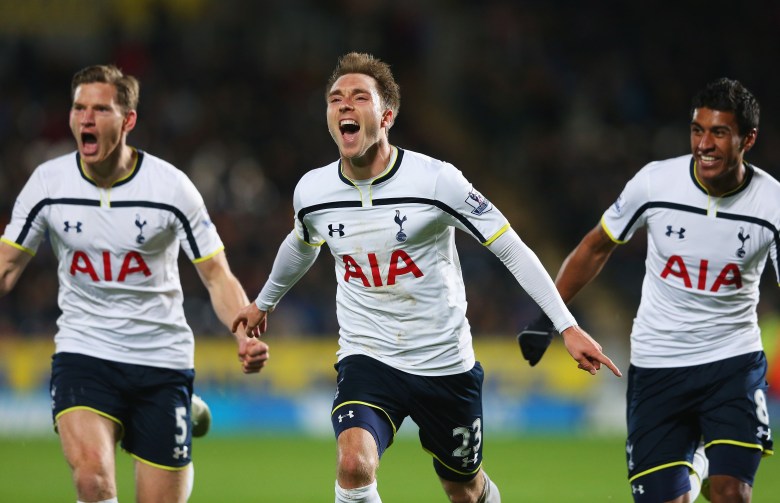 There have been few good moments so far this season for Tottenham, which, as BBC’s Ian Dennis points out, is off to its worst start since 2008-09.

But trailing by a goal in the second half Sunday at Hull City, Spurs rallied for a riveting 2-1 win when Christian Eriksen netted the game-winner in the 89th minute.

Read on for a recap and here to check out a photo gallery.

With Hull playing with 10 men after Gaston Ramirez’s red card, Tottenham kept the pressure on in the second half and eventually delivered when Christian Eriksen scored in the 89th minute to put Spurs ahead 2-1.

Harry Kane Scored to Tie it for Tottenham

Tottenham was staring at a 1-0 deficit in the second half Sunday against Hull City when Harry Kane came through with the equalizer in the 62nd minute.

Christian Eriksen’s free kick bounced to Kane, who converted to tie the score.

Gaston Ramirez Got a Red Card for Kicking Out Jan Vertonghen

The turning point in the game may have come early in the second half when Hull’s Gaston Ramirez was sent off with a red card after kicking out Tottenham’s Jan Vertonghen.

The card forced Hull to play with 10 men for more than 50 minutes, paving the way for Spurs’ comeback.

Former Spur Jake Livermore got the scoring going early with a perfectly placed shot into the left corner that put Hull up 1-0 in the opening minutes.

As the Spurs Stat Man points out on Twitter, Livermore already has more goals against Spurs than he scored in 36 Premier League appearances for them.

Jake Livermore didn't score a single goal in his 36 appearances for Spurs.

Hull City vs. Tottenham: The Pictures You Need to See

Read More
Breaking News, Soccer
Tottenham came from behind Sunday to pick up a thrilling road win over Hull City in a battle of two struggling Premier League sides.