This is Brennan Clay , he took to Twitter during NFL Sunday on November 30 to claim that his wife was having an affair with Dallas Cowboys star Demarco Murray. Clay and Murray were teammates with the Oklahoma Sooners during their college years.
The couple were marred in July 2014, she’s the mother of two kids already from a previous relationship.

On Tuesday afternoon, former Oklahoma Sooners running back Brennan Clay took to Twitter to announce that he had apologized and forgiven his wife Gina D’Agostini, and that she did not have an affair with current Dallas Cowboys running back DeMarco Murray. 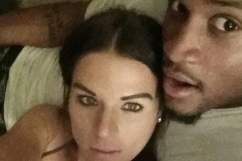 She also has two children from a previous marriage.

2. The Incident Occurred in Late November and Clay Took to Twitter

On November 30, Clay took to Twitter to announce that his wife had been having an affair with Murray.

One of Clay’s tweets from that day:

“So Demarco Murray was having an affair with my wife ..I’m done.”

3. Clay is Very Religious and Doesn’t Hide It

The following link — https://www.facebook.com/ilovejesus24/about — is Brennan clay’s personal Facebook. The URL is: “IloveJesus24 — because the first 23 were taken. Clay also routinely attends church

4. A Series of Tweets Included Pictures of Text Messages Between His Wife and Murray

In her phone book, Murray is named as “Spray Tan.”

Jumped to a conclusion that wasn't true ..can't judge a situation without knowing all the facts ..I apologize .. pic.twitter.com/uqoI6HDrbP

In this picture, it is clear that both he and his wife are cuddling on the floor, with no clothes on, and the picture is taken from an odd angle that makes it look like D’Agostini’s arms are long — a borderline uncomfortable picture — but it shows that the two have seemed to make up and put the events of late November behind them.

Read More
Breaking News, Football, NFL
Brennan Clay tweeted that his wife Gina D'Agonstini did not cheat on him with Cowboys running back DeMarco Murray.