It started with politics. I love Twitter more than is healthy, check it every moment I can get away with and generally think it’s one of the best and most democratic and meritocratic means of communication that’s ever been developed. As I first started on Twitter, I followed a British Member of Parliament named Stella Creasy. Stella Creasy is awesome. I actually got to meet her once, in a story I told her I’ve rarely been more pissed off in my life than when I saw Stella Creasy’s mentions in the summer of 2013. This was a while ago and it climaxed with this

It pissed me off for two reasons:

I was looking at Tweetdeck and uttering obscenities like I was John Nash in a Beautiful Mind.

I’ve tried not to let Dr. Stella Creasy’s mentions bother me since that time, but I admire a number of women in American Sports Media and their mentions make me INSANE.

If I looked at Erin Andrews I’d probably be as nuts as Nash. It’s unbelievable what she puts up with. Katie Nolan too.

This Saturday I unintentionally did look at a female mutual Twitter pal’s mentions while she and I were chatting and I went utterly insane. I have never met this person. We’ve interacted plenty on social media and I like her a great deal. She’s smart, she’s really good at social media (which is frankly the highest compliment I can bestow a person) and she’s really really good at talking about basketball.

I’m not kidding. I don’t know many of the people who are enduring this personally. They’re the 21st century equivalent of a pen pal. Yet reading their mentions from these troll asshats makes me so angry, I fly off the handle. I’m a pretty laid back guy, haven’t been in a fight in years (and then it was merely in self defense) and these people, none of whom I have met, only know and respect, put up with abuse that makes me so angry that I could have strangled the idiots uttering it.

There are two components to that.

1) I should probably not check other people’s mentions if I think it could lead to homicide.

2) Jesus Tap Dancing Christ, women who put forward opinions on politics or sports suffer through an incredible amount of ridiculous B.S. that makes me want to hurt people.

I will not speak for the women involved, they can speak for themselves as they are as, if not more, intelligent than me and have to deal with this on a daily basis and I only look over once in a while and probably piss them off with my “Big Brother” act.

The fact that this is happening to good people is bull. It needs to stop. People are petitioning Twitter and I’m glad for that. But I’m telling my gender to stop this stupid behavior.

Because I was pretty willing to go brass knuckles on some idiot, just to shut you ridiculous morons up.

And I know I’m not the only one.

The most famous victim of winning a ton of games yet having to go on the road in the playoffs to a division champ is probably the team I most want to see sneak into the playoffs this year at 6-10 and make someone like Philly haul themselves down to Gumboland. I am actively rooting for that to happen. Meanwhile, Rex Ryan to the Bears? Doesn’t that solve everyone’s problem? I mean, Ryan doesn’t know how to handle offense or quarterbacks at all, but make him hire Norv Turner and tell him to go micromanage the defense and entertain the Midwestern media. Therefore the Saints need to win for that to happen.

Many, many people, including me, greatly enjoy Johnny Football. Many, many more, particularly old and cranky and white men, do not. Therefore this is a hate-watch for you, conservative America. Put down your gun and your Barack Obama voodoo doll long enough to watch this kid disrespect the game you so completely and slovenly don’t understand. It is so, so perfect that this game is on FOX. Man, those guys know their audience. 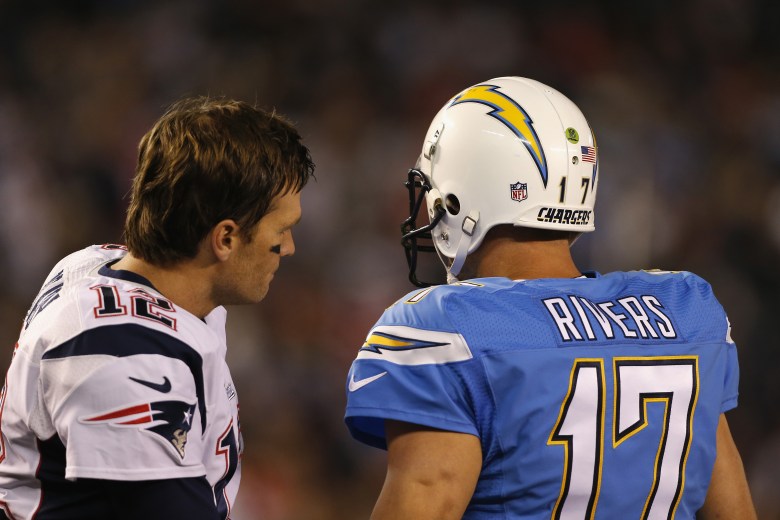 This is a huge division game, the Chargers are good at home and are not just trolly good this year, but objectively good this year. The Denver Broncos are, in sharp contrast to last season, somehow still flying under the radar this year. After last year’s Super Bowl it seems we’re all being quite snobbish about how to complement the reliably, obnoxiously competent Peyton Manning. Make time for this one, if only to pine for the weather in San Diego as you sit inside in the damn cold. 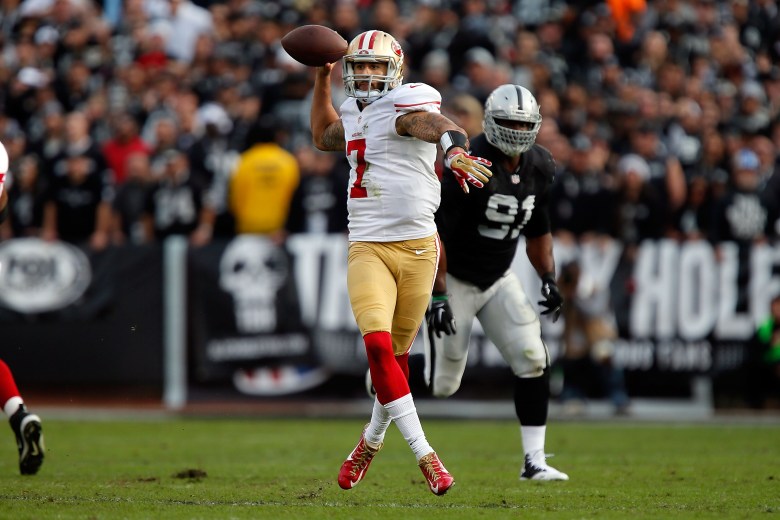 Whenever Alabama doesn’t play for a national championship, they reliably lose a bowl game and I have a theory as to why: it is really, really hard to play for someone who is that much of a sonofabitch if it is’t for a title, so the second the title is off the table, the athletes completely check out and wait for the season to end. It sorta feels that way in San Francisco this year where Jim Harbaugh’s act has run thin with management, the team lost a few games in a sick division, and the players are waiting for him to bail on them for Michigan (which is exactly what should happen). Old Yeller likely gets put out of its misery in this game by a Seahawks team that finally got its act together in the middle of the season, after yelling at each other the way a rock band that finally makes it big does when someone steps on a guitar solo or hordes all the good blow.

I like that picture of Romo way more than I should. I will also enjoy when Dallas gets throttled and gets left out of the playoffs with something like 11 wins and New Orleans gets in. The collective freakout will be fantastic.

This Week’s Game: Titans +3 against the Jets.

The dog is not under .500 and is really sick of me showing her Youtube clips and then me getting mad at her for being a dog picking football games. We picked this game because it’s two places I lived, Tennessee and New York. Also, Sierra really liked the Titans uniforms. Probably because they are white just like her and she is a closet racist.

Plainly speaking, Tennessee is an awful team. The Jets, however, are the Jets. They should not be laying points on the road. Also, since this is a race to the bottom for the right to pick another quarterback to ruin, I’d rather Nashville not win so I can watch the Jets ruin another promising young athlete so fast you’d think they’re the team in Washington. By the way, chances that RGIII at some point plays quarterback for the Jets? 35%. Anyway the dog is picking her fellow white Titans. I feel confident that I’m not misrepresenting her wishes at all.

Donna: I’m not wild about this whole Indonesian thing.

Donna: I’ve been doing some reading on my own.

Josh: I wish you wouldn’t do that.

Josh: Because you tend to cull some bizarre factoid from a less than reputable source and then you blow it all out of proportion.

Donna: I just thought you might like to know that in certain parts of Indonesia, they summarily execute people they suspect of being sorcerers.

Donna: I read it.

Josh: They … summarily execute people they suspect of being sorcerers?

Donna: They behead them.

Donna: Gangs of roving people. Beheading those they suspect of being sorcerers. You know with … what’s that thing that Death carries?

Donna: They’re doing it with a scythe.

Josh: Well, thanks for the head’s up.

Enjoy the weekend and the games people. And be nicer to women on Twitter and, you know, in general. 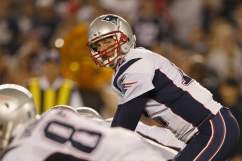