Speaking out for the first time since his indefinite suspension and ultimate reinstatement, Ray Rice told NBC’s Matt Lauer that he made a “horrendous mistake” in not apologizing to his wife Janay at a press conference in May, but that the event was scripted by the Ravens and that he and Janay weren’t being themselves.

Rice’s comments aired Tuesday on the Today show, a day after NBC aired an interview with Janay Rice and her mom, Candy Palmer.

At the May 23 press conference, Rice apologized to a list of people and groups that included the Ravens organization and its fans for punching Janay inside an Atlantic City casino elevator in February. He did not apologize to Janay, who was seated next to him and apologized for what she said was her role in the incident.

In the interview that aired Monday, Janay Rice told Lauer that she wouldn’t have been sitting with Ray at the press conference if she hadn’t been the first person to get an apology.

But not issuing a public apology to Janay was a mistake, Ray Rice said.

Here’s the transcript of Lauer’s exchange with Rice about the press conference, courtesy of NBC:


Lauer: We didn’t see a ton of anger on Janay’s face. We also heard her apologize and at that press conference we didn’t hear you apologize to her. And that upset a lot of people. Do you understand that?

Rice: Yes, I definitely understand that. The reason why that press conference was the way it was, was because we were still under legal situations. So there wasn’t much that could be said, but I’ll be honest, we were nervous, I was nervous, and that was the first time we were available to speak. And I made a horrendous mistake not apologizing to my wife.

We were given what to speak about. It wasn’t truly coming from us, if you can understand, but I made that clear in my last time I was able to speak that my wife is an angel. She can do no wrong. I take full responsibility for my actions. 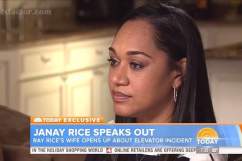 Janay Rice’s Mom, Candy Palmer: Video Was What I Expected