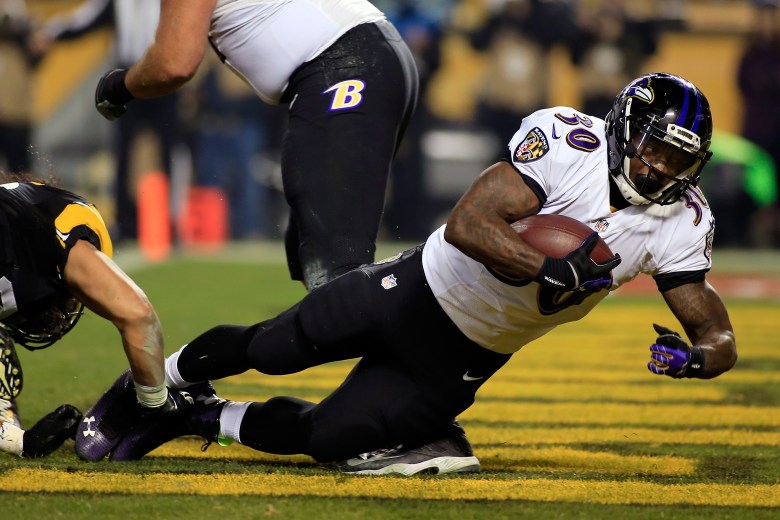 Bernard Pierce and the Ravens bullied the Steelers last week to set up Saturday’s showdown with the Patriots. (Getty)

When it comes to the regular season, Bill Belichick and the New England Patriots have the Baltimore Ravens’ number. The Pats lead the series 7-1.

But the playoffs have been a different story. John Harbaugh‘s Ravens are 2-1 against the Patriots in the postseason with all 3 games being played in Foxboro, Mass. That’s where the two will rekindle the rivalry in Saturday’s AFC Divisional Playoffs.

The last time the teams met in Gillette Stadium, Baltimore beat up Tom Brady and the Patriots 28-13 in the AFC Championship Game after the 2012 season. The Ravens went on to defeat San Francisco in the Super Bowl 2 weeks later.

Baltimore is coming off another road playoff win, a 30-17 wild-card victory in Pittsburgh. The Ravens got another standout postseason performance from quarterback Joe Flacco, who has 13 touchdowns and zero interceptions over the past 5 playoff games, all Ws.

Tom Brady and the Patriots used a midseason 7-game winning streak to take another AFC East crown and claim the top seed – and home-field advantage – throughout the playoffs. 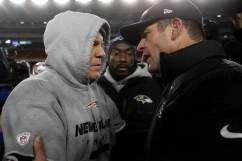 The Ray Rice debacle turned journeyman Justin Forsett into a 1,200-yard rusher (1,266 to be exact) while averaging an NFL-best (among running backs) 5.4 yards per carry.

And no discussion about the Ravens would be complete without mentioning the defense, which ranks in the league’s top 10 in rushing yards allowed (4th), scoring (6th at 18.9 points per game) and total yards (8th). They didn’t force many turnovers (22 for 22nd in the league) and struggled against the pass a bit – 249 yards per game and 64.2 completion percentage allowed. Elvis Dumervil‘s 17 sacks led the team and C.J. Mosley finished with 133 tackles (89 solo)

Special teams-wise, Baltimore had one of the best kickoff returners in the business in Jacoby Jones, who averaged 30.6 yards per return and had a 108-yard touchdown. Kicker Justin Tucker was 25-for-25 on field goals under 50 yards, but just 4 of 9 on attempts longer.

As it has since 2001, everything starts with Brady. Another 4,000-yard, 30-touchdown season (4,109 and 33) is in the books. Tight end Rob Gronkowski was back to his dominating ways (1,124 yards and 12 touchdowns) and Julian Edelman was a dual-threat in receiving (92 receptions) and punt returning (12.0 average and a TD). Heck, Brady even made Brandon LaFell a weapon.

The Pats are in the lower half of the league in rushing as they were led by Jonas Gray‘s 412 yards. Yes, that’s it. And 201 of them came in 1 game.

Defensively, the Pats lost tackling machine linebacker Jerod Mayo to the IR, but were just behind Baltimore with 19.6 points allowed per game. They were above average vs. the run (9th at 104 ypg) and middle-of-the-pack against the pass (240 ypg). Rob Ninkovich had 8 sacks.

Stephen Gostowski is a big plus in the kicking game as he led the NFL with 35 field goals and 156 total points. He missed only 2 FGs.

Harbaugh and Flacco put on their best performances in the playoffs, while Brady has looked almost human in the postseason lately. The Pats are 4-1 in their last 5 home playoff games. The 1 loss? To Baltimore.

But this is a new season.

The Ravens will make the Patriots one-dimensional on offense, but Brady has too many weapons in the passing game and there are a few too many holes in the Baltimore secondary.

No doubt the Ravens are road warriors and it’s very – very – tempting to pick them. But I can’t. I won’t. This time the Patriots take advantage of their home-field advantage. 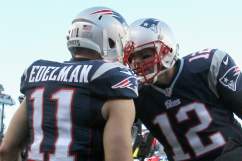