Former FBI director Robert Mueller III’s report on the NFL’s handling of the Ray Rice case says there was no evidence that the league had seen the notorious Atlantic City elevator video of Rice assaulting fiancee Janay Palmer before TMZ posted it.

The report, which was overseen by Giants owner John Mara and Steelers owner Art Rooney, also says there was no evidence that a woman in the league audience had confirmed to a law enforcement source that she received the video in April — five months before TMZ published it.

Commissioner Roger Goodell, who initially suspended Rice for a mere two games after the incident, reversed course and suspended him indefinitely amid the public outcry once TMZ published the video on September 8, calling into question what Goodell knew and when he knew it.

Goodell tapped Mueller, who ran the FBI for 12 years, to compile the report after the Associated Press reported that the unidentified woman in the league office had received the video in April. 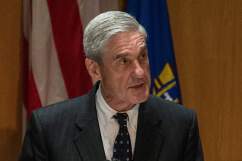