General view of action between the Arizona Cardinals and the San Francisco 49ers during the NFL game at the University of Phoenix Stadium on December 29, 2013 in Glendale, Arizona. The 49ers defeated the Cardinals 23-20. (Photo by Christian Petersen/Getty Images)

This year’s NFL Super Bowl XLIX (49) will take place at the University of Phoenix Stadium in Glendale, Arizona.

The game is on Sunday, February 1, at 6:30 PM and will be aired on NBC. Katy Perry will performing the halftime show.

The University of Phoenix Stadium is the home of the NFL team the Arizona Cardinals.

It will be the second time the stadium has hosted a Super Bowl. The last time was Super Bowl XLII on February 3, 2008 when the New York Giants defeated the previously undefeated New England Patriots 17-14. 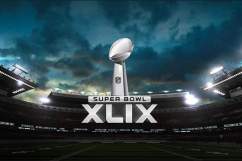 Who Is Playing in the Super Bowl This Year?