Among the many celebrities enjoying tonight’s NBA All Star game from courtside was pound-for-pound champ Floyd Mayweather Jr. “Pretty Boy Floyd” has been the center of speculation and anticipation as the sports world waits to hear if he will finally face long-time rival Manny Pacquiao.

TNT caught up with Mayweather (47-0, 26 KOs) during the game, inquiring about the possibility of any forthcoming announcements. Mayweather was quick to shoot down any rumors for a Manny Pacquiao superfight, stating that neither he, nor Pacquiao had yet signed the contracts.

This contradicts previous reports that Manny Pacquiao’s half of the contract had been signed, sealed, and delivered.

Floyd Mayweather Jr. and Manny Pacquiao (57-5-2, 38 KOs) established their dominance over boxing’s mid-weight divisions a decade ago and have been skirting and dodging each other for almost as long.

Pacquiao was last in the ring easily out-pointing a game but overmatched Chris Algieri in November 2014. Prior to that, Pacquiao had defeated Timothy Bradley and Brandon Rios after being flattened in a sixth-round knockout-loss to nemesis Juan Manuel Marquez in 2012.

And so the boxing world holds its breath awaiting the word on a match that has been years in the making. 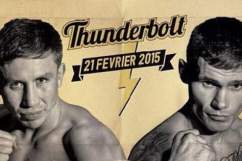