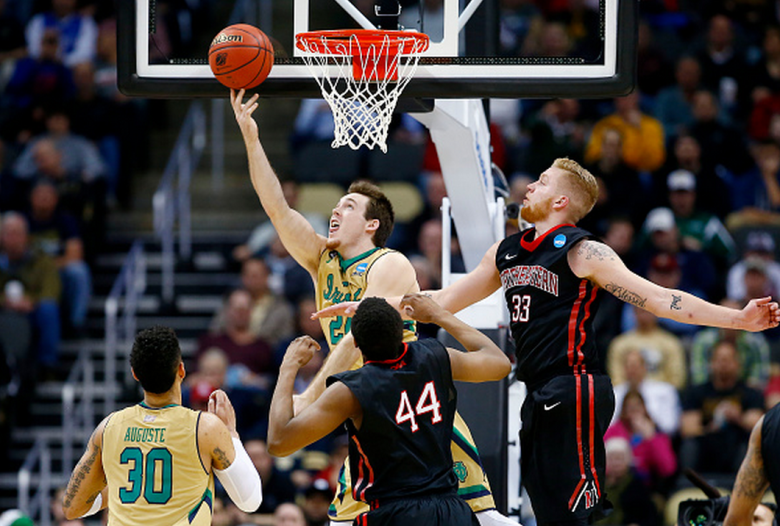 Pat Connaughton #24 of the Notre Dame Fighting Irish shoots against the defense of Zach Stahl #33 and Reggie Spencer #44 of the Northeastern Huskies in the second half during the second round of the 2015 NCAA Men’s Basketball Tournament at Consol Energy Center on March 19, 2015 in Pittsburgh, Pennsylvania. (Getty)

Notre Dame has continued its winning ways. After winning their first-ever ACC Tournament Championship, the Fighting Irish received the No. 3 seed in the Midwest region, which lined them up against No. 14 Northeastern in the round of 64.

It came down to the wire in Pittsburgh, but Notre Dame prevailed to walk away with the 69-65 win. And with the victory, the Fighting Irish advance to the round of 32 to play No. 6 Butler – as the Bulldogs routed No. 11 Texas, 56-48.

The Butler Bulldogs were one of the top Big East teams this season and finished out the regular season with a record of 22-10 overall and 12-6 in the Big East conference. Butler Head Coach Chris Holtmann is in his first year at the helm of the Bulldogs and will look to continue his success with the program.

Here’s the line, according to OddsShark.

Read More
5 Fast Facts, Basketball, Breaking News, College Basketball, March Madness 2015, NCAA, NCAA Tournament
It came down to the wire in Pittsburgh when No. 3 Notre Dame topped No. 14 Northeastern. The Fighting Irish will face No. 6 Butler in the round of 32.