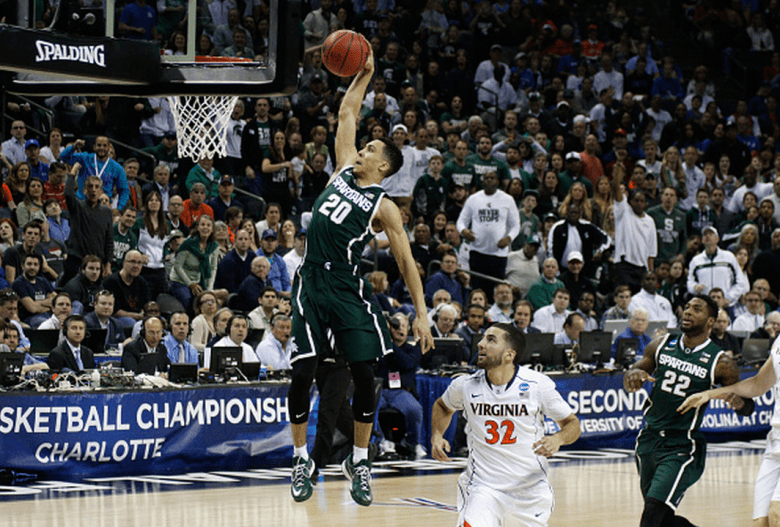 Michigan State’s Travis Trice drives to the basket against the Virginia Cavaliers during the 2015 NCAA Men’s Basketball Tournament. (Getty)

After a week of literal madness, the field of 68 has dwindled to just 16 still vying for the national championship. Four of those teams have already punched their tickets to the Elite Eight, while the others will face off today, Friday, March 27. The nightcap on Day 2 of the Sweet 16 is No. 3 Oklahoma vs. No. 7 Michigan State.

Oklahoma is one of the seven Big 12 teams that had the chance to dance in this year’s NCAA Tournament. After receiving a selection committee bid, the Sooners defeated No. 14 Albany in the Round of 64. Oklahoma faced the known sleeper team – Dayton – and put them to rest in the next round as they beat the Flyers, 72-66. With the win, the Sooners not only move on to the Sweet 16, but also head coach Lon Kruger becomes the first coach in NCAA history to win a tournament game with five different teams – Oklahoma, Kansas State, Florida, Illinois and UNLV – four of which advanced to the Sweet 16.

Michigan State Head Coach Tom Izzo knows the recipe to a successful postseason and so far he has showcased that. After finishing out the regular season as runners-up in the Big Ten Conference Tournament, the Spartans routed No. 10 Georgia in the round of 64 and then delivered an upset to No. 2 Virginia. With the win over the Cavaliers, Michigan State moves on to its 13th Sweet 16 appearance in the past 18 seasons.

The game starts at 10:07 p.m. Eastern and will be covered by TBS. The announcers for the game will be Verne Lundquist, Jim Spanarkel and Allie LaForce.

The winner between Oklahoma and Michigan State will move on to play the winner of No. 4 Louisville vs. No. 8 NC State in the Sweet 16. That game will take place on Sunday, March 29.

But before that happens, here’s how to watch Oklahoma vs. Michigan State online and on mobile:

NCAA Tournament Preview: Oklahoma vs. Michigan State | CampusInsidersCampus Insiders presents "Who's Got Next? Powered By XFINITY." Shae Peppler and Jordan Cornette break down the upcoming matchup between the Sooners and Spartans and predict the winner. SUBSCRIBE: http://www.youtube.com/user/CampusInsiders Campus Insiders takes you deep inside college sports with game highlights, interviews and a behind the scenes perspective of the trending stories of the day…2015-03-23T01:17:04.000Z 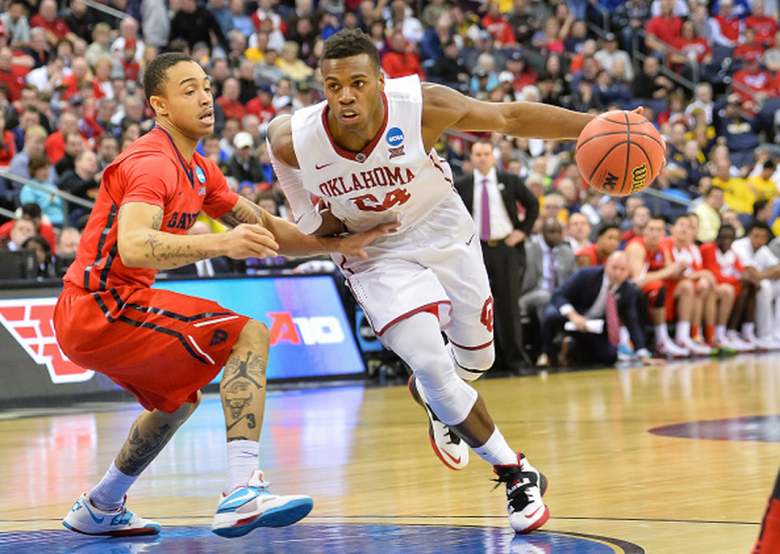 Read More
Basketball, College Basketball, March Madness 2015
The Sweet 16 in the NCAA Tournament continues March 27. Find out how to watch East matchup No. 3 Oklahoma vs. No. 7 Michigan State online and mobile here.