Canelo Alvarez delivers a right hand to James Kirkland during their super welterweight bout at Minute Maid Park on May 9, 2015 in Houston, (Getty)

In an all out war in the Lone Star State, Canelo Alvarez stopped James Kirkland with a picture-perfect kayo on Saturday in front of over 30,000 fans at Minute Maid Park in Houston, Texas.

The end came at 2:19 of the third round, courtesy of a dead-on right hand from El Canelo that spun Kirkland like a top and dropped him into an immobilized clump. Kirkland had previously been down twice in the fight, once in the first round and once in the third, before the final KO.

Check out the shot that sent Kirkland down for the count:

The two warriors came out banging in the first round, with Kirkland making early gains by pressuring Canelo onto his back foot and unloading on him against the ropes and in the corners.

But Kirkland’s early success was short-lived after a Canelo left-hook unleashed a sustained attack that sent the Texan down to the mat for the first time in the fight. Canelo came on strong for the minute left in the first installment, bludgeoning the injured Kirkland with shots to the head and body– but iron-jawed Kirkland managed to survive the round on his feet.

Canelo’s work rate decreased in the second round, giving Kirkland a chance to capitalize again against the ropes with short, but numerous, punches to the head and body.

In the third round, Kirkland came out pressuring and quickly had the redhead pinned against the ropes while pitter pattering against his body and head. Canelo fought his way out, landed a shot to the body, and followed with a big right that put Kirkland down for a second time.

With less than a minute left in the round, Canelo uncorked a pair of right-hand shots that put Kirkland to sleep for good, and capped off beautifully the quick but action-packed encounter.

“Kirkland is a great fighter,” Alvarez told HBO’s Max Kellerman after the fight. “We knew he was going to come in a throw punches. You know, at the beginning, we were both a little exhausted, but I knew it would happen. I knew we would win the fight”

With the victory, Alvarez’s record improves to 45-1-1 with 32 KOs. The 24-year-old was last in action outpointing a slippery Erislandy Lara in July of 2014. Going into the Lara fight, the Guadalajaran had stopped Alfredo Angulo after suffering his only career-loss to Floyd Mayweather Jr. in 2013.

James “Mandingo Warrior” Kirkland (32-2, 28 KOs), had last been in the ring almost two years ago before Saturday, handing Glen Tapia his first career-defeat with a sixth-round TKO in July 2013. Kirkland had won his last five fights since suffering his only other professional loss, to Nobuhiro Ishida in 2011.

“Canelo is a crafty fighter,” Kirkland said. “He comes with a lot of skills, a lot of fights. I take nothing away from him, he showed it tonight.”

Next For Canelo? GGG Golovkin? Cotto?

The Frankie Gomez vs Humberto Soto co-feature was cancelled after Gomez was unable to make the 140-pound limit. 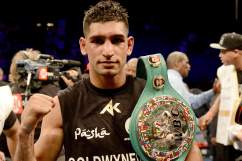 When is Amir Khan’s Next Fight?

Round 1: Vamos, amigos! Kirkland wears black with red, Canelo in black trunks. Kirkland shoots from a southpaw stance. They meet in the middle of the ring, Kirkland starts pressuring. Right hand from Canelo. Hard jab from Kirkland followed by work to the body. Canelo against the ropes, in the corner eating punches. Kirkland landing well with Canelo in the corner. Canelo ties up, and they’re at it. Canelo lands big left hook. Another. Upper cut from Canelo. Right from Alvarez hurts Kirkland. Another. Another . Kirkland KNOCKED DOWN! Minute left in the round. Canelo shooting big. Left to the body from Canelo. Canelo with a right hand. Canelo with left hook, hurts Kirkland. Alvarez landing well with good variant. Kirkland survives. 10-8 Canelo

Round 2: Middle of the ring. Big left from Kirkland. Alvarez unloading against the rope. Alvarez can’t miss. Kirkland comes back, back he looks weak. Kirkland working the body. Uppercut, body hook from Canelo. Canelo on the ropes, taking pitter patter from Kirkland. Kirkland landing short shots with Canelo in the Corner. Big right from Canelo, he gets out of the corner. Uppercut Kirkland. Hard left from Alvarez. Alvarez a lot less active. Upper cut from Canelo. Another. 19-18 Canelo