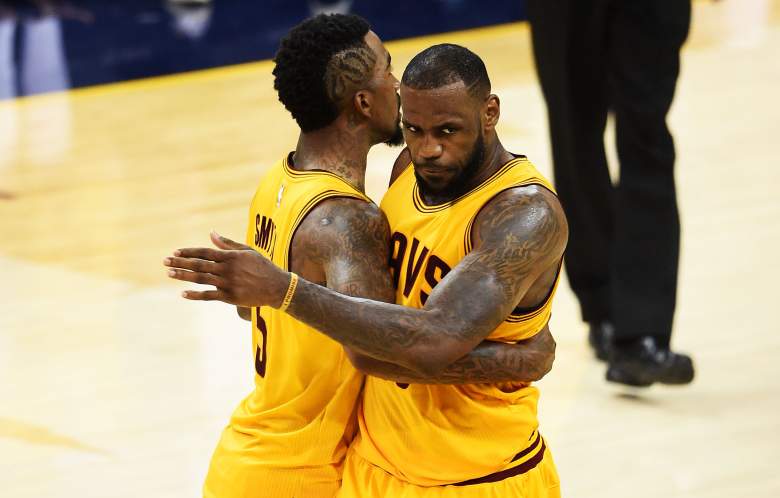 J.R. Smith, LeBron James and the Cleveland Cavaliers clinched a spot in the NBA Finals on Tuesday night. (Getty)

The Cleveland Cavaliers wasted no time in punching their ticket to the NBA Finals.

With a 118-88 win over Atlanta on Tuesday night, the Cavs swept the Eastern Conference championship series from top-seeded Atlanta. Cleveland now awaits the West winner between the Golden State Warriors and Houston Rockets for a meeting in the NBA Finals, which begin on Thursday, June 4, with Game 1. The game is scheduled to tip at 9 p.m. Eastern and all contests will air on ABC.

The Warriors lead the series 3-1 and host the Rockets in Game 5 on Wednesday night at 9 p.m. Eastern. It can be seen on ESPN.

The NBA Finals have a 2-2-1-1-1 series format and the team with the best regular season winning percentage gets home court advantage. Golden State finished the regular season with 67-15 record (.817 winning percentage). The Rockets were 56-26 (.683) and the Cavs 53-29 (.646), meaning the winner of the Western Conference will host 4 of the 7 games, if the series goes that deep.

When it appeared both the East and West Conference championships might end in sweeps, there was talk of the Finals date moving up. But the NBA decided to keep Game 1 on June 4, citing TV commitments, logistical issues, among other factors.

Here is the complete NBA Finals schedule (per NBA.com), including with dates, times and TV information.

Editor’s note: Heavy’s partners at DraftKings are transforming fantasy sports with one-day contests designed to make you quick – and big – money. Head over to DraftKings.com, sign up and start winning cash today from MLB, NHL, PGA, NASCAR, NBA, MMA and soccer fantasy games. As a first-time user, when prompted, use promo code “Heavy.”