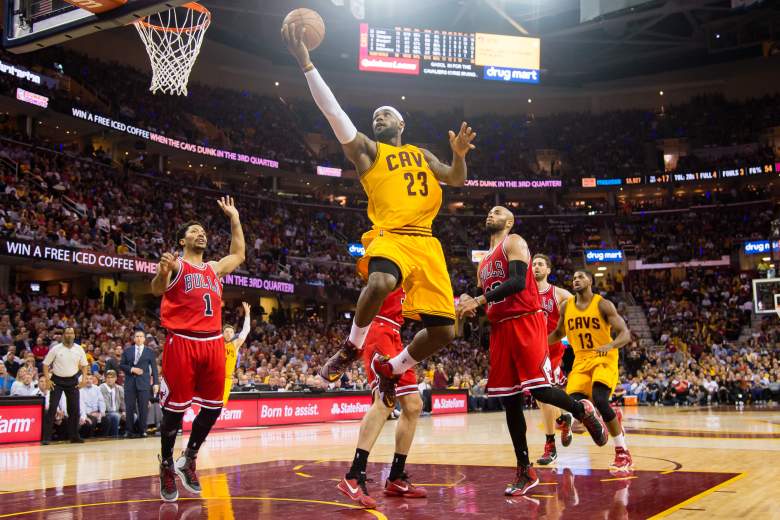 LeBron James scored 33 points in the Cavaliers’ win over the Bulls Wednesday. (Getty)

The Cavaliers needed a big game from their best player to avoid falling into an 0-2 hole to the Chicago Bulls.

LeBron James scored 33 points and grabbed 8 rebounds to lead the top-seeded Cavs to a 106-91 home win Wednesday to even the Eastern Conference semifinal series at 1 game apiece.

The series shifts to Chicago Friday night for Game 3. Tip time is scheduled for 8 p.m. Eastern and the game will be televised by ESPN.

On the play-by-play is Mike Breen, who will be joined by analysts Mark Jackson and Jeff Van Gundy.

DraftKings has created an NBA $100K Sharpshooter contest, which is scheduled to begin Friday, May 8, at 8 p.m. Eastern. The contest is free for first-time DraftKings users and $3 for current members.

The rules are easy: When you sign in for the contest, you will be given a fixed salary cap of $50,000 to draft your 8 player roster. The Player Pool will consist of all NBA players expected to be playing on a given game day.

Sign up for DraftKings and start winning money today.

LeBron James Bounces Back with 33 in Game 2LeBron James brought the headband back, and led the Cleveland rout of Chicago with 33 points to even the series at 1 game apiece. About the NBA: The NBA is the premier professional basketball league in the United States and Canada. The league is truly global, with games and programming in 215 countries and territories…2015-05-07T02:31:33Z

LeBron James Takes It to the Tin on Jimmy ButlerLeBron James drives and dunks on Jimmy Butler with authority. About the NBA: The NBA is the premier professional basketball league in the United States and Canada. The league is truly global, with games and programming in 215 countries and territories in 47 languages, as well as NBA rosters at the start of the 2014-15…2015-05-07T00:49:27Z