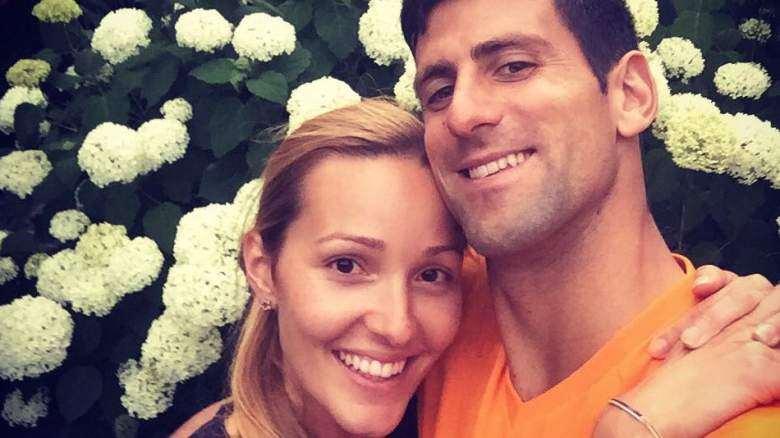 Jelena and Novak Djokovic celebrate their 1-year Anniversary on the eve of the Wimbledon men’s final. (Instagram)

The player’s box at a Wimbledon final is a fascinating place, crammed full of myriad coaches, agents and hangers on, all of whom have a strong financial incentive to want their man to win. Few of them, however, will show the level of passion, commitment and sheer volume that comes forth from the players’ wives, and Sunday’s final between Roger Federer and Novak Djokovic will be no exception.

Federer’s wife Mirka is seemingly omni-present in the Wimbledon player’s box, only taking time away from court-side to give birth to their two sets of twins, who are occasionally in the box themselves. She’s been present on Centre Court for all 10 of Roger’s Wimbledon finals, invariably joined by a celebrity or two, be it Gwen Stefani and/or Gavin Rosdale, Tiger Woods or Bradley Cooper.

A former tennis pro herself, the couple met at the 2000 Sydney Olympics, where they were both representing Switzerland. Mirka’s own competitive edge clearly hasn’t blunted since she retired from playing the game in 2002. A, shall we say, “enthusiastic” supporter, she’s been known to engage in the odd bout of smack talk with her Husband’s opponents. At the 2014 ATP Tour Finals in London late last year, for example, she was accused of heckling fellow Swiss Stan Wawrinka, whom she appeared to call a “cry baby” shortly before he was due to receive Federer’s serve.

Roger and Mirka married in 2009, and their two sets of identical twins – Myla Rose and Charlene Riva, and Leo and Lenny – were born in July 2009 and May 2014 respectively.

Novak Djokovic’s wife Jelena Ristic is an equally regular figure court-side, though perhaps a little less feisty. She missed his Australian Open victory over Andy Murray at the start of the year to look after their son, Stefan, whom she gave birth to in October, though they were both watching from home. As well as providing her husband with “emotional support”, she runs his charity, the Novak Djokovic Foundation, set up to help needy children in the couple’s native Serbia and war-torn Kosovo.

The couple married shortly after Novak’s Wimbledon victory over Federer last year and, by dint of the fact that The Championships were moved back a week for 2015, they’ll have celebrated their first anniversary on the eve of Sunday’s final. The traditional gift for the one-year anniversary is paper, though we suspect Novak will be hoping to have some silverware to show Jelena come Sunday evening.

Click on the links below for more on Jelena Ristic and Mirka Federer.