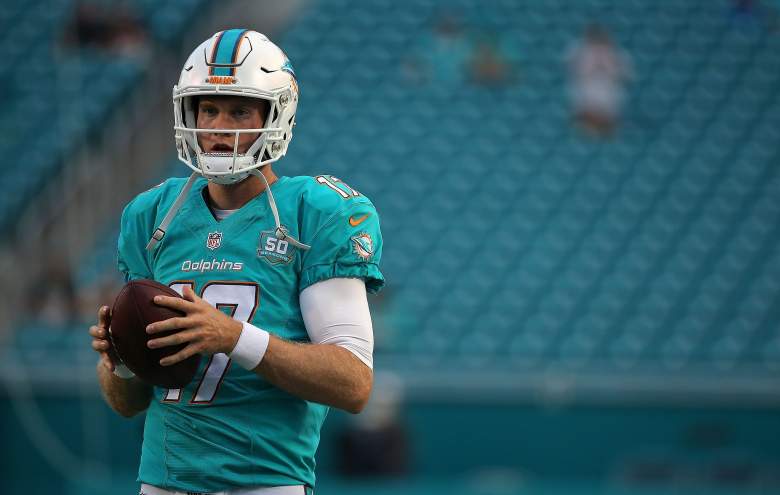 Ryan Tannehill is set to lead the upstart Miami Dolphins this season, looking to start a posteason run from Sunday’s opener. (Getty)

That’s the mentality of the Washington Redskins this season. This is a team that, desperately, needs to move forward. It needs to move past a disastrous preseason and a quarterback battle that not only took up headlines but left a bad taste in everyone’s mouth.

The Redskins will get their first chance to put everything, all of that drama, in the collective rearview mirror on Sunday afternoon, hosting the Miami Dolphins in the regular season opener. Of course, it won’t be easy. This is a Dolphins team that boasts one of the most aggressive defensive lines in the league, a group that is ready and anxious to hit. Kickoff for the opener is slated for 1 p.m. ET. Here’s everything you need to know about the matchup and the squads:

Who:
Miami Dolphins vs. Washington Redskins

Channel:
The game will be broadcast on CBS with Ian Eagle and Dan Fouts on the call. Click here to see a full broadcast map and find out if the game is being shown in your area.

Are the Miami Dolphins the darkhorse of the entire NFL this season? They might be. Stay with us here.

Ryan Tannehill is a good quarterback. He really is. He threw for 27 touchdowns last year and he’s got an offensive line in front of him that not only looks complete but, knock on wood, injury-free. Tannehill also has DeVante Parker to throw to this season and after a college career that showed plenty of potential, Parker can be a solid option for his QB.

Then, there is the defense. This is where the Dolphins might have their biggest opportunity to shock the NFL world. Ndamukong Suh has already been a sparkplug on the Miami defensive line and it’s not even October yet. If Miami is going to start any kind of postseason run now, Suh is going to need to play the football of his life and the guys around him are going to have to follow suit.

Kirk Cousins officially commented on that giant elephant in the Washington Redskins’ metaphorical room. Cousins talked about Robert Griffin III. You know that guy who used to be the team’s starting quarterback? Yeah, that guy.

“I think Robert, as an experienced player, knows how to handle the whole situation, the whole dynamic and I don’t see him as being a distraction,” said Cousins on 106.7 The Fan’s Grant and Danny earlier this week. “He’s been very classy through this whole process. Both he and I have had ups and downs through the last three seasons and I’ve learned through adversity and through success that he’s handled things in a very classy way. I feel good about it going forward.”

So, that’s that then. Right? Not quite.

Cousins, now the starter for the foreseeable Redskins future, still has to deal with an offensive line that is about as good at blocking oncoming defenders as a sheet of loose leaf paper and a receiving corps that is led by a guy (DeSean Jackson) who spent the preseason more focused on his Instagram than on anything else.

It won’t be an easy opener for Cousins but Washington and head coach Jay Gruden are set in their decision and, really, the offense is resting on their collective shoulders. Game on.