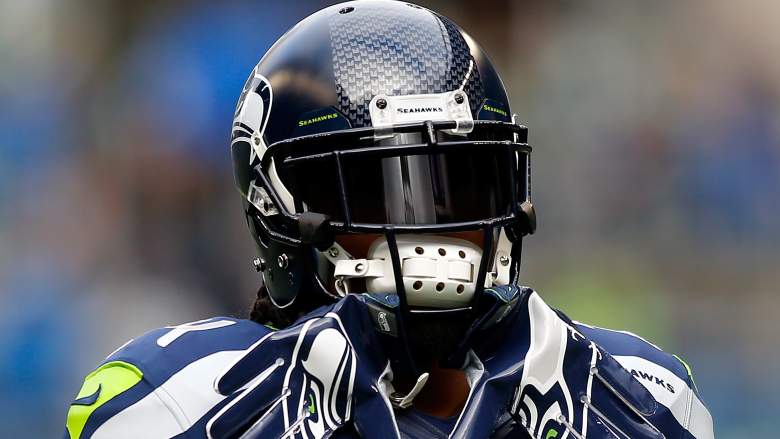 For the Seahawks, Tyler Lockett returned a punt for a touchdown and the defense forced three takeaways, but the offense struggled to find a consistent rhythm against a Rams defense that recorded six sacks and controlled the line of scrimmage.

Read ahead for all the highlights:

Aaron Donald is an animal in a phone booth https://t.co/qoqxxrchHf

Seattle’s first drive of the season began in encouraging fashion, as Marshawn Lynch, Jimmy Graham and Tyler Lockett all picked up some nice gains, and fullback Derrick Coleman converted fourth-and-short to push the ball inside St. Louis’ 30-yard line.

A sack from dominant defensive tackle Aaron Donald quickly put a stop to the momentum, though, and Seattle was ultimately forced to punt.

Lockett is in his first career NFL game, but it was already pretty obvious that kicking to him is a bad idea. He returned a couple of kicks back during the regular season and has proven to be an absolute terror on special teams.

Backed up into their end zone, St. Louis punted to Lockett, who fielded it and went 57 yards untouched into the end zone. It would have been a touchdown in flag football, and it’s probably not the last time he’ll do that this season.

#NFL A Tavon Austin sighting in the backfield… #Rams pic.twitter.com/V3SGc9jHWe

Filling in for Todd Gurley and Tre Mason, third-year back Benny Cunningham made a couple of nice plays, including a 17-yard reception on 3rd-and-15 to extend the drive. Nick Foles went 4-of-5 for 70 yards in what was a really nice answer from the Rams, whose offense was expected to struggle against Seattle.

Capping the impressive 9-play, 80-yard drive, wide receiver Tavon Austin took an inside handoff and cut it outside for a 16-yard touchdown.

Wilson’s first incompletion of the game was a bad one, as Trumaine Johnson made an impressive break and diving interception, setting up the Rams on the Seattle 26-yard line.

The ‘Hawks defense was able to hold strong, limiting the damage to a 33-yard field goal from Greg Zuerlein.

On just the third play of the second half, there was a miscommunication between Foles and Rams center Tim Barnes, leading the former to bobble the snap and hand the ball over to Seattle on the 39-yard line.

As the Seahawks did following their turnover, the Rams defense came up big in the red zone, making a big tackle on Jimmy Graham on third-down and holding Seattle to a field goal.

Foles Bounced Back By Leading Another 80-Yard TD Drive

This particular march was even easier than the one in the first half, as the Rams needed only six plays and three-and-a-half minutes to move the ball 80 yards. Foles completed big plays to Kenny Britt and Jared Cook before finishing the drive with a one-yard touchdown run on play action.

St. Louis is at a healthy 6.2 yards per play, while Seattle is managing a meager 4.0.

Tavon Austin Added a Punt Return TD of His Own

Not to be outdone by Lockett’s score from earlier in the game, Austin took one back 75 yards, impressively staying in bounds while tip-toeing the sideline and avoiding defenders.

The Rams are dominating every facet of the game at this point.

Wilson Connected with Graham to Cut Into the Rams Lead

Desperately needing a score, the Seahawks went 63 yards on 12 plays. Graham, the team’s marquee acquisition in the offseason, had been mostly quiet up to this point, but he made a couple of big receptions on the drive, including one for seven yards in the end zone.

Lynch was also key on the drive. He rumbled for 24 yards on an important down, and he converted the two-point conversion to get the Seahawks within a field goal.

The Rams were marching down the field, but as has been so common the last couple of years, Earl Thomas came up with a crucial play in the fourth quarter, forcing a fumble from Isaiah Pead. Bruce Irvin recovered, and the Seahawks were back in business:

[fixed link] Cary Williams forces the fumble– oh and he recovers it for a touchdown as well http://t.co/TMf0Vf22bf

On the ensuing drive, Seattle increased the tempo and moved the ball fairly well but once again sputtered in the red zone, leading to a game-tying field goal from Hauschka with just under five minutes left.

Moments later, the ‘Hawks dialed up a cornerback blitz and Cary Williams came up with the sack, forced fumble, fumble recovery and touchdown in a matter of seconds:

[fixed link] Cary Williams forces the fumble– oh and he recovers it for a touchdown as well http://t.co/TMf0Vf22bf

Down by a touchdown late in the fourth, St. Louis drove 84 yards on 12 plays, converting an astounding four third-downs along the way. The last was the biggest, as Foles connected with Lance Kendricks for a 37-yard touchdown when Dion Bailey–the main replacing Kam Chancellor–slipped and fell.

After losing the coin toss, the Seahawks attempted a sneak onside kick, but the Rams were ready for it and recovered. Two plays later, Foles connected with Stedman Bailey, who made a fantastic over-the-shoulder catch in between Richard Sherman and Earl Thomas to set up a Rams field goal.

On the ensuing drive, Seattle drove past midfield, but on 4th-and-1, Marshawn Lynch was stuffed by St. Louis’ defensive line, which dominated for much of the game. 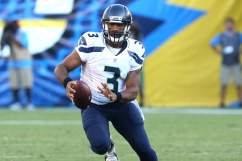