Up-and-coming junior welterweight standout Dustin Fleischer improved his perfect record to 5-0 with 5 knockouts by stopping Oscar Diaz on Saturday on the undercard to Chris Traietti vs. Gary Tapusoa at the Dorchester Armory in Boston, Massachusetts.

Referee Stephen Clark called an end to the contest during the second round of the fight, after a looping right hand from Fleischer put southpaw Diaz (0-9, 0 KO’s) on the mat and deemed unable to continue. Check out the bout-ending punch below.

“Everyone moves to the left on southpaws,” said Fleischer post-fight via Facebook. “But I like to see how they throw their left first because if its thrown across their body I like to move right.”

Fighting out of Monmouth Beach, New Jersey, two-time State Golden Gloves champion Dustin “The White Tiger” Fleischer had previously been in action with a first-round stoppage win over Ira Frank in September. Prior to facing Frank, the 25-year-old prospect had bulldozed over Stacey Anderson and Kareem Millner, both in June of this year.

Going into Saturday’s encounter, Oscar Diaz, from Hartford, Connecticut, had last been in the ring in August, suffering a defeat at the hands of Malik Jackson. Diaz will get another chance at Jackson with a rematch scheduled for November at Barnstable High School in Hyannis, Massachusetts.

“Its all in a day’s work but I learn something from each fight,” said Fleischer. “Just got to keep working hard and staying smart.” 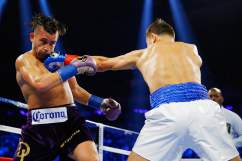 Read More
Boxing
Up-and-coming junior welterweight Dustin Fleischer stops Oscar Diaz on Saturday at the Dorchester Armory in Boston. We have your result and highlights.