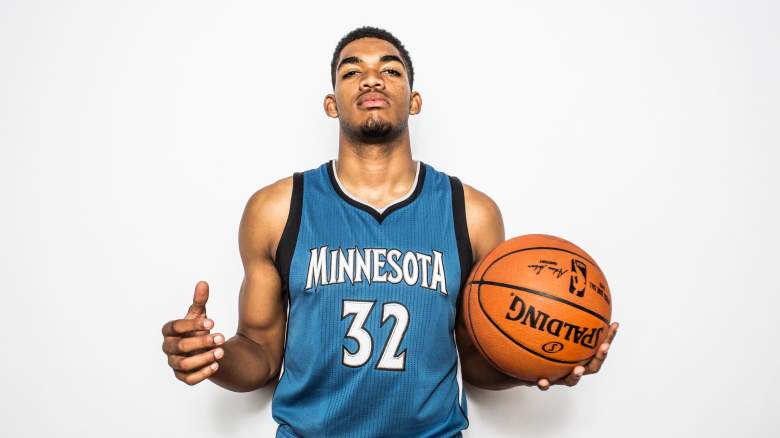 No. 1 overall pick Karl-Anthony Towns made his (non-Summer League) NBA debut Wednesday, as the Minnesota Timberwolves took on the Oklahoma City Thunder.

And it couldn’t have gone much better. Although the ‘Wolves fell, 122-99, Towns looked like one of the best players on the court, shooting 8-of-12 (2-of-2 from the line) for a team-high 18 points with five rebounds, one assist, two steals and two blocks in 28 minutes.

Going up against Enes Kanter, who has never been known for his defense (putting it kindly), Towns knocked down the first four shots of his career, and mid-way through the first quarter he had already tallied eight points, an offensive rebound and an assist. Here’s a look at one of his first baskets:

Although he stands at 7-feet-tall, Towns has always been able to stretch the floor, and that was on display early, as the Star Tribune’s Jerry Zgoda noted:

It didn’t take long to show off his versatility, as he also posted up Kanter and beat him pretty easily with a running jump hook in the lane:

When he returned to the game midway through the second quarter, he found different ways to impress. First, he showed off his passing skills, as the Associated Press’ Jon Krawczynski described:

That pass resulted in two free throws for Lorenzo Brown, and when he missed the second, Towns cleaned up the miss and proceeded to put Mitch McGary onto a poster:

Towns’ versatility was noticeable on the defensive end, too. John Meyer of CanusHoopis.com noticed one particulary instance where the rookie was able to use his athleticism and length to challenge on the perimeter:

Towns flew out to the perimeter to contest Waiters 3-pointer. Wasn't even close to going in. It's awesome to have a big man that can do that

Towns made a bunch of plays on the defensive side of the ball, including two steals and a block in the third quarter alone. It’s early, but the ‘Wolves have to feel happy about their decision to take the former Kentucky star. He looks like a stud on both ends of the court.