Lamar Odom’s state can be attributed to the loss of his friend Jamie Sangouthai. (IG @bigjriz)

As Lamar Odom fights for his life in a Vegas hospital, his family and friends are searching for answers. It may not be known what put Lamar in this condition, but it appears there is an important moment in the timeline of events leading up to his collapse. Odom has been reeling from yet another loss in his life: the death of his childhood friend Jamie Sangouthai.

Sangouthai and Odom grew up together in Queens but hadn’t spoken in over a year when Sangouthai died in June. Odom was devastated upon hearing his passing, and called his ex-wife Khloe Kardashian to mourn and seek support. When Odom was at the Love Ranch this weekend, he got a call about an episode of Keeping Up With The Kardashians that featured his phone conversation with Khloe. It is rumored that hearing about this episode infuriated Odom and sent him into the binge that resulted in his current state.

Here’s what we know about Sangouthai:

Lamar and Jamie on Draft Night, when Lamar was selected fourth overall by the Clippers. (IG @bigjriz)

Lamar and Jamie have been friends since the beginning, growing up in Queens, New York. Sangouthai moved to LA specifically for Odom, and worked for Odom managing his record label. While Khloe sometimes complained on her show that Jamie partied too much, she insisted that Sangouthai was not a mooch:

“Jamie was on Lamar’s payroll, but he worked hard,” the friend said. “I don’t want people to think he was a junkie on Lamar’s tail. He always had jobs, and never needed Lamar.”

Sangouthai was one of the best men at Khloe and Lamar’s wedding in 2009. 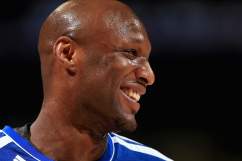 Lamar Odom’s Net Worth: 5 Fast Facts You Need to Know

Sangouthai was killed by a bacterial infection caused by dirty needles. (IG @bigjriz)

Sangouthai’s partying caught up with him, and he died on June 15, 2015. He was rushed to a hospital after a suspected overdose, and died shortly after. LA Coroner Ed Winter told media,
“Jamie Sangouthai died from the bacterial skin infection necrotizing fasciitis, which is an infection that enters the body through intravenous drug usage. It was a very quick death and was caused by self-injections (and) has been ruled an accident.”

Khloe hadn’t always been the biggest fan of Sangouthai, but took to social media to mourn the loss. When Lamar heard the news he reached out to Khloe, whose conversations were being filmed for an episode of “Keeping Up With The Kardashians.” On the show, Khloe talked about Odom and their status after their conversation. It is believed that Odom’s portrayal in the episode led to his brothel overdose.

3. His Death Was Caused by Flesh-Eating Bacteria

While Sangouthai’s death was a suspected overdose, coroners were able to identify the actual cause of death. Sangouthai had died from a flesh-eating bacteria, caused by self-injection with needles.

Necotizing fasciitis, the infection that killed Sangouthai, is a rare disease that causes rapid tissue death. It is most commonly found through use of infected needles, and it affects 600 to 700 people in the U.S. annually. Symptoms progress quickly, from flu-like ailments in the first 24 hours, to tissue death and gangrene after as little as three days. 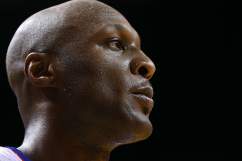 4. Lamar Was ‘Devastated’ After His Death

After hearing of Sangouthai’s death, Odom was shocked and devastated. He was surrounded by friends and family in Vegas after the news, and was too upset to fly east for Sangouthai’s funeral. Reportedly Odom called losing Sangouthai the “worst tragedy” he has experienced.

“Worst tragedy” means more when coming from Lamar Odom. The man has endured many tragedies during his life, so that statement offers some perspective on his love for Sangouthai. Odom’s mother died from colon cancer when he was 12 years old, and he was raised by his grandmother. That grandmother passed away early in Lamar’s NBA career, right before he signed his contract with Miami. He also lost an infant daughter to S.I.D.S..

5. Odom Talked to Khloe About Sangouthai’s Death On KUWTK

When Odom called Khloe Kardashian to mourn the loss of his friend, he was truly hurting and in need of support. He probably wasn’t thinking that while Khloe was listening to Lamar, the cameras were rolling. Keeping Up With The Kardashians used footage of the conversation, and talked more about Lamar’s feelings in-depth on an episode of the show.

It is rumored that this episode, which was airing while Lamar was hanging at Love Ranch South, was what caused Lamar’s emotions to change. Brothel owner Dennis Hof said that Odom became “solemn” on Sunday, the same day the episode aired. Sources also said he became “irate” after seeing how he was portrayed on the episode.