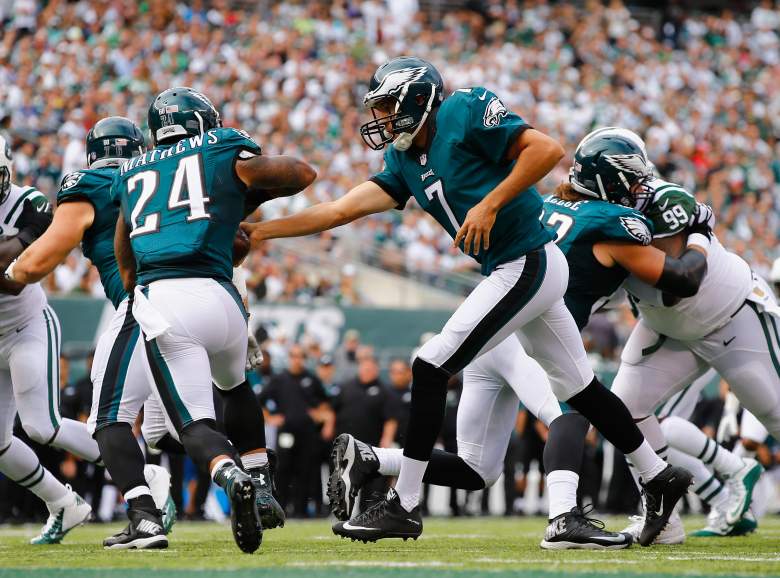 The Philadelphia Eagles got the ground game going last week, despite an injury to DeMarco Murray, in their first victory of the season. (Getty)

Hurricane Joaquin is barring down on the East Coast and while the storm won’t postpone the Philadelphia Eagles and Washington Redskins Week 4 matchup, it will almost certainly have a pretty big impact on how the game is played.

The NFL had originally considered postponing the game until Week 8, when both the Eagles and Redskins are scheduled to have a bye, but opted instead to keep the game as scheduled. According to NFL.com, the game could still be moved to Detroit if the weather doesn’t cooperate.

The Eagles, who are 1-2 ATS this season, are listed as the 3 point favorites against Washington at sportsbooks monitored by OddsShark.com. Philadelphia notched its first victory of the season last week, as the offense, finally, found its footing, bolstered by the performance of Ryan Mathews and Darren Sproles. In an almost ironic twist, the Eagles were able to win without DeMarco Murray who was sidelined with a hamstring injury in Week 3. Murray has struggled to find his rhythm this season, unable to get much room behind an offensive line that has been moderately disappointing.

Philadelphia is 7-3 overall, 5-5 ATS and 4-5-1 over/under in its last 10 games as the favorite against Washington, according to the OddsShark NFL Database. The most recent occurrence came on December 20, 2014 when the Eagles lost to Washington 27-24. Prior to that, the Eagles had won five straight.

The Redskins are 4-6 overall, 5-5 ATS and 4-5-1 over/under in its last 10 regular season games at home. Washington has spent the better part of the past week focusing on its run game, and holding on to the ball, looking to minimize turnovers in Sunday’s potentially sloppy conditions. The team has been practicing outdoors, in the rain, and may even wear longer cleats on Sunday to combat the turf at FedEx Field. Matt Jones, who has rushed for 189 yards and two touchdowns this season, has also worked on ball security after fumbling twice in the past two games.

The total for Sunday afternoon’s Philadelphia vs. Washington betting matchup is set at 47.5 points at the sportsbook.

Read More
Exclude, Football, NFL, Philadelphia Eagles, Washington Redskins
Get ready to see plenty of running as the Eagles square off against the Redskins on Sunday afternoon in what is projected to be some pretty messy conditions at FedEx Field.