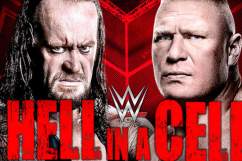 Here’s our extensive preview piece on each and every announced matchup that will take place on the October 2015 PPV/special event, WWE Hell in a Cell 2015!

Predictions & Winners: A lot of ongoing beefs are going to mashed up here. Ziggler is going to call upon the aid of Cesaro and Neville as they butt heads with Rusev and his teammates Sheamus and King Barrett. To be quite honest, both teams need the win. The babyface squad could win here and go on to newer rivals or championship opportunities, but the heels could prosper a bit more with a victory. Sheamus needs to keep going strong as Mr. Money in the Bank and Rusev plus King Barrett really can’t afford to take more L’s on PPV’s. This a Kickoff match though, so chances are high that the good guys are getting their hands raised as the winners.

Predictions & Winner: So far, Owens run as Intercontinental Champion has been pretty basic and formulaic. He smashes some random challengers while the former champion eyes him for a potential rematch. That rematch is set to go down on at Hell in a Cell 2015. Ryback is coming into this match with even more intensity and anger than before due to Owens’ smartass comments towards him. It’s much too early for Owens to relinquish his newly one championship, in our opinion. Owens retains his championship and uses some type of nefarious maneuver to do just that. We get the feeling that both men are going to run into each other again on opposite teams for the 2015 Survivor Series.

Predictions & Winners: So last time, we predicted that The Dudley Boyz were going to shock the live fans at the MSG house show that just passed. By surprise, we mean totally shocking everyone and capturing the WWE Tag Team titles from The New Day during a house show. But alas, it didn’t come to fruition. We’re going back to the 3D well once again and placing our bets on Bubba Ray and D-Von finally defeating their happy-go-lucky opponents. Expect several near falls and breathtaking counters in this tag team encounter. For a match that we think will be capped off by The Dudley Boyz winning, we envision it being a barn buster of a match.

Predictions & Winner: Charlotte has been through a lot since she captured the Divas championship from longtime title holder Nikki Bella. Her once best friend Paige has turned her back on her and Becky Lynch, plus Team Bella has turned up the heat on her during such an epic breakup. Charlotte’s focus may be lying elsewhere when she steps into the ring for this title defense, which seemingly gives Nikki the edge. But Charlotte’s title reign is just starting to get legit, so we see her hanging onto her title and continuing to stake her claim as the top current WWE Diva.