Andrew Luck is dealing with a change to his offensive coordinator Sunday. (Getty)

When Peyton Manning lost to his former team in the playoffs last season, many thought we were witnessing an NFL transition. We were watching, through playoff football, Peyton Manning pass the torch to Andrew Luck as the NFL’s premier quarterback.

So much for that theory.

Denver is 7-0 this season, and is a 4.5-point favorite heading into Indianapolis Sunday, according to sportsbooks monitored by OddsShark.com. While Manning has looked healthier than when these teams last met, the biggest matchup Sunday will be the struggling Andrew Luck against the stout Broncos defense.

Indianapolis has lost three straight games, but is 2-1 ATS in those games. The Colts have risen to the occasion at times, notably their performance against New England. Not only are the Broncos undefeated, they’ve also covered in all but one game this season (5-1-1).

Denver has been getting it done on defense, and last week they proved it on a national stage. The Broncos held Aaron Rodgers and the Packers to just 77 passing yards on their way to a dominating 29-10 victory.

According to the OddsShark NFL database, November is a very different time for these teams. The Colts are 5-13 ATS in their last 18 games at home in November, while the Broncos are 9-3 SU in their last 12 games on the road in the month.

Sportsbooks have the total Sunday set at 45 points. The total has gone OVER in four of the Colts’ last six games.

The OddsShark Computer is projecting a 25.4-19.4 Broncos victory, making Denver cover the spread by one point. History has been kind to the Colts, but the computers don’t know how good Denver’s defense is. This could be a blowout. 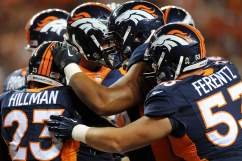 How to Watch Broncos vs. Colts Live Stream Online