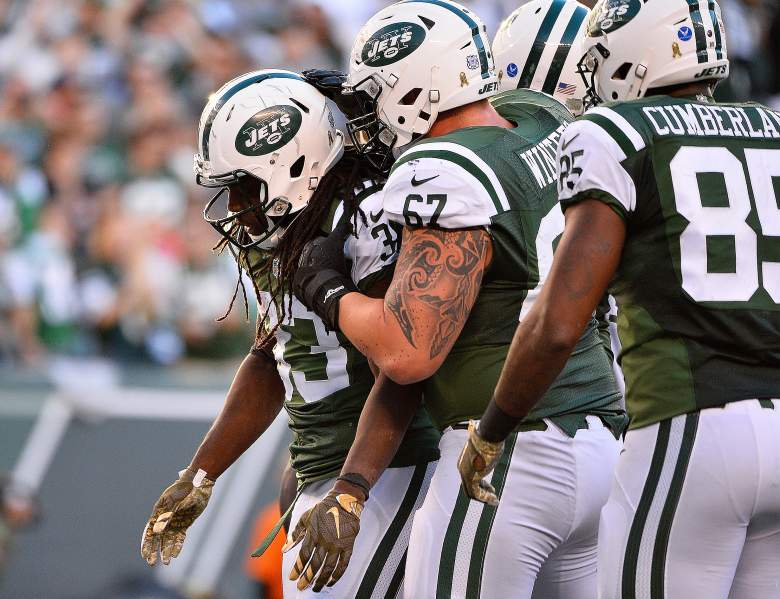 Chris Ivory ran for two touchdowns as the New York Jets handed the Jacksonville Jaguars yet another road loss on Sunday afternoon. (Getty)

Gang Green battled through a barrage of offensive injuries and held on for a late-game defense stand to hand the Jacksonville Jaguars another road loss on Sunday afternoon.

Ryan Fitzpatrick, despite that torn ligament in his non-throwing hand, threw for 272 yards and two touchdowns, completing 21 of his 34 pass attempts. That was a good thing, because the Jets run game was almost non-existent, racking up just 29 yards total. Still, Chris Ivory managed to rush for two touchdowns, because sometimes sports don’t make any sense at all.

On the flip side, Blake Bortles threw for a whopping 381 yards and two touchdowns, but also tossed two interceptions, including the late-game miscue to seal the Jets victory.

Click here for a full box score of the game and read on for all the highlights of the Sunday afternoon matchup:

Bortles to Walters & This One Isn’t Over Yet

Blake Bortles may have been up-and-down throughout the game on Sunday, but he came through in the clutch when his team needed him. Bortles found Bryan Walters for the touchdown strike to cap of a 3-play, 72-yard drive that was exactly what Jacksonville needed late in the fourth quarter.

Seriously. This is one heck of a catch. There was a bit of debate on whether or not Marshall was able to maintain control on his way to the ground, but he did and it was incredibly impressive.

Go ahead and watch that one again, Jets fans.

Chris Ivory In For the TD – Again

That arm extension, though.

Chris Ivory found the end zone for the second time this afternoon, giving the Jets a much-needed cushion late in the third quarter. Ivory hasn’t exactly been productive on Sunday, but he’s certainly making good use of the chances he’s getting in the red zone. Check this out:

That’s one way to get a boost of halftime confidence.

Blake Bortles and Allen Hurns hooked up for one heck of a touchdown catch, cutting into the Jets lead and heading into the break with a brand-new boost of confidence. Check this out:

It also lifted Hurns into the Jaguars history books. The wideout has now caught a touchdown pass in six straight games, the longest streak for a franchise wide receiver since 2006.

Watch this play. Watch his feet. They don’t stop moving:

After trying to go airborne on the play before, and being denied at the line of scrimmage, Jets running back Chris Ivory took a different approach and battled his way through the line to notch his first touchdown of the afternoon.

Eric Decker was questionable coming into Sunday – not to mention Ryan Fitzpatrick is playing with a torn ligament – but the the two Jets standouts managed to connect in the early goings of the first quarter to put New York on the board.

On paper, this doesn’t look like a particularly exciting matchup. Off paper, it’s a big game for both teams, bordering fairly close on must-win.

The Jets come into the matchup riding a two-game skid, including a blowout loss to the Oakland Raiders last Sunday, and desperately need a victory to get back on track and stay on pace in the AFC East. Despite a torn ligament in his left thumb, which will require surgery, Ryan Fitzpatrick will get the start under center for Gang Green.

On the flip side, Jacksonville could actually move into a tie for first place in the AFC South with a victory. That’s a true fact. A victory would put the Jaguars at 3-5 and they would be tied for first place in the division. Jacksonville also has the fourth easiest schedule going forward through the rest of the season, so a victory this Sunday could be the start of something really good for this team.