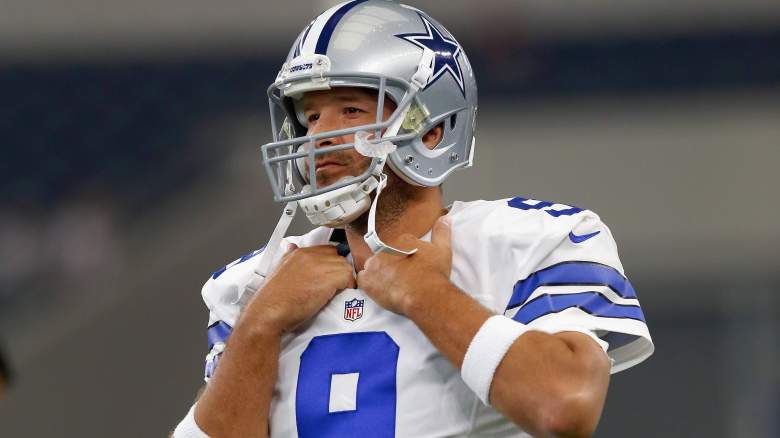 Dallas Cowboys quarterback Tony Romo, was spotted throwing passes – and completing them – during the team’s practices on Wednesday afternoon. (Getty)

Deep breaths, Dallas Cowboys fans, Tony Romo was back on the field on Wednesday. Well, the practice field at least.

The quarterback, who has been sidelined since Week 2 when he injured his clavicle against the Philadelphia Eagles. Since then, the Cowboys have lost five straight, started two different quarterbacks and suffered through a little over a month of fairly disappointing football.

With all of that in mind, this video, from DallasCowboys.com staff writer David Helman is nothing short of a gift from the football gods:

It looked good on film and Romo’s return sounded even better on social media. Check it out:

Romo just uncorked on a 25-30 yard comeback route to Terrance in pass skel. He looks fine.

But, let’s not get ahead of ourselves Cowboys fans. Sure, it was great to see Romo out on the practice field and passes like that have been far and few between over the past few weeks with Brandon Weeden and Matt Cassel at the offensive helm. But, don’t expect to see No. 9 out on the field against the Philadelphia Eagles this Sunday.

Dallas doesn’t want to rush Romo back and, quite simply, the team isn’t allowed to play him for another two weeks. Although Romo never underwent surgery, he was placed in the injured reserve/designated to return list so, officially, he can’t come back to the game until, at least, November 22.

That’s a matchup against the Miami Dolphins and one the Cowboys are fairly certain Romo won’t miss.

Jones says @tonyromo is doing well, sees no reason for him not to return as scheduled on Nov. 22 vs @MiamiDolphins

Jones told CBS Sports Radio affiliate 105.3 the Fan on Tuesday, “I know of no reason why he won’t be playing at that time.”

It’s an interesting timetable for Romo, who was originally projected to miss eight weeks. The November 22 return would fit nicely in that outlook, but at this point, with two games in between then and now, is it actually a rush job by the Cowboys and their quarterback? After all, two more losses would put Dallas at 2-7 on the season and the Week 11 game against the Dolphins is just four days before a Thanksgiving game against the Carolina Panthers who have been nothing short of dominant so far this season.

No matter what happens, though, or how soon Romo can return to the gridiron, one thing is for sure; it’s good to see him throwing again.