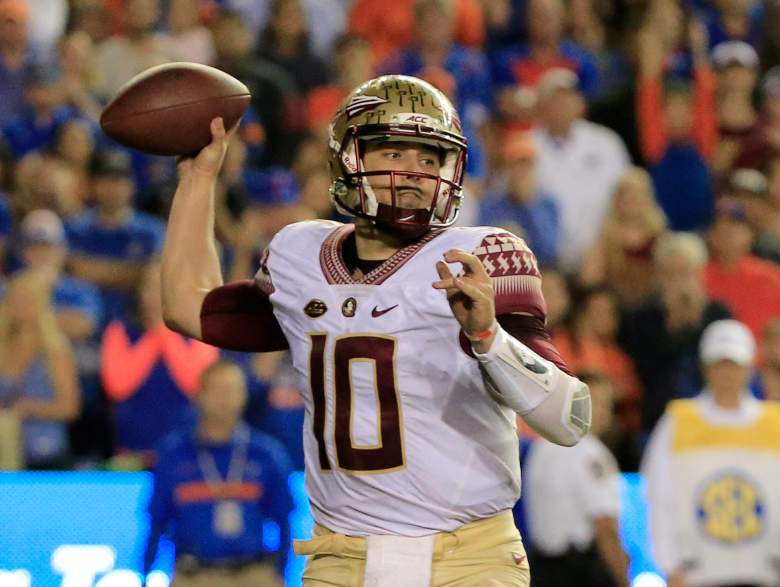 Sean Maguire is ready to prove he’s the best option for 2016 with a Peach Bowl victory on Thursday. (Getty)

Welcome back to the spotlight, Sean Maguire.

The Florida State quarterback is set to make his fifth start of the season on Thursday afternoon when the Seminoles square off against Houston in the Peach Bowl. It’s the ending for a roller coaster season that had Maguire competing for his football-playing life more than once.

Maguire will, once again, take over control of the Florida State offense from Everett Golson who didn’t even travel with the team to Atlanta ahead of today’s bowl matchup. Golson missed practice time with the team before the Seminoles broke for Christmas break because of “a family matter” and FSU coach Jimbo Fisher said he was not with the team this week because of “a personal issue.”

Maguire’s in-game attempts were cut short on Thursday however, when he suffered a leg injury in the first half. Check out the scary moment here:

Maguire went back to the locker room and his return to the game was listed as questionable. JJ Cosentino took over under center for the Seminoles. Cosentino is a redshirt freshman at FSU who was a four-star prospect coming out of high school and competed with the scout team in 2014.

Despite the injury, Maguire ultimately came back into the game – with a fairly large cast on his foot – after Cosentino struggled on the field.

Throughout the course of the season, Golson and Maguire had competed for the starting job under center. Maguire started against Syracuse and Clemson in the middle of the year, but was benched for Golson leading up to the NC State matchup. However, Golson couldn’t compete against the Wolfpack, Maguire returned to the game and remained the Seminoles starter for the rest of the season.

Coming into the game, he had been anxious to prove himself in the Peach Bowl. Maguire told the Palm Beach Post:

It’s pretty crazy to think about it. I would not be the same player I am right now if I hadn’t gone through those competitions. Those were a blessing disguise over the past three years. I think it’s more the confidence, the chip on the shoulder. I think that Everett coming probably made the chip a little bigger.

The Seminoles are 3-1 with Maguire as the starter this season, plus another win when he came in during the NC State game. He’s completed 62.1 percent of his 145 passing attempts this season, throwing for 1,128 yards, nine touchdowns and two interceptions.

It’s enough to inspire more than just a bit of confidence in his teammates.

“What we’ve all seen from Sean is that he has a lot of heart, he cares about this team,” FSU receiver Bobo Wilson told the Orlando Sentinel. “He wasn’t the starter at the beginning of the season, but he showed [Fisher] that he wanted the job and he’s been successful since.”

Kickoff for the Peach Bowl between FSU and Houston is slated for 12 p.m. ET and is being nationally broadcast on ESPN.