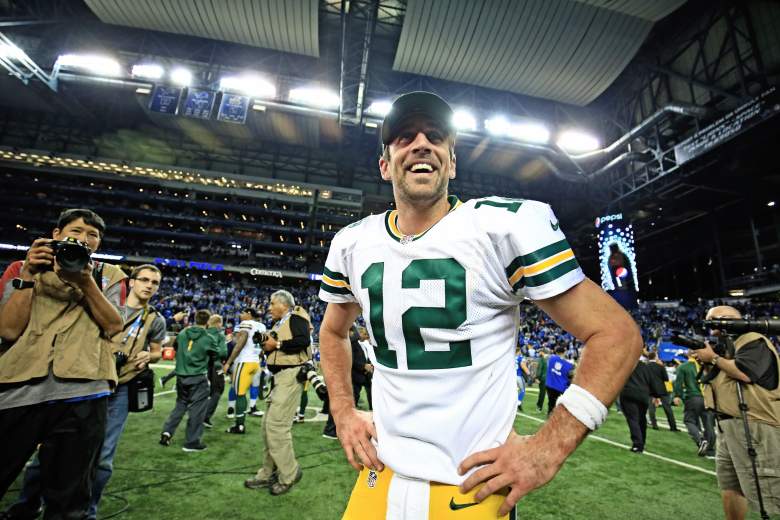 Aaron Rodgers made one of the best plays of the NFL season. (Getty)

The Green Bay Packers shocked the country on one of the most memorable plays of the 2015 season. The Lions led the entire game except on the final score.

Aaron Rodgers was sacked as time expired in what appeared to be the last play of the game. A flag was thrown and the Lions were called for a facemask on the sack. This left the Packers with one un-timed down to attempt to do the unthinkable. With no time on the clock, Rodgers rolled out and threw the ball high in the air.

Tight end Richard Rodgers boxed out Lions defenders and came up with the catch to win the game. Rodgers threw the ball an estimated 70 yards.

Here are the highlight of the game including the amazing Hail Mary pass:

The Lions Jumped Out to a Big Lead

Matthew Stafford connected with Eric Ebron in the endzone for a touchdown. The score made it 10-0 in favor of the Lions. Ameer Abdullah had a couple nice runs to help the Detroit offense move down the field.

A few plays after the Lions went up 10-0, Aaron Rodgers threw an interception. The Lions capitalized on the turnover with this Calvin Johnson touchdown.

The Packers Scored Their First Touchdown Off Their Own Fumble

That's one way to get in the end zone. Packers fumble turned Packers #Touchdown! pic.twitter.com/V9yehjbNnZ

James Starks was running towards the endzone when a Lions defender knocked the ball out. The ball rolled into the endzone and Packers receiver Randall Cobb fell on it for a touchdown.

DeVante Adams Scored His First Touchdown of the Season

If you aren't going to pressure Aaron Rodgers in the Red Zone, touchdowns are going to be thrown. #GBvsDET https://t.co/xaCKkVvgch

Adams has been in and out of the Packers lineup all season due to injuries. He finally found the endzone for the Packers second touchdown of the game.

The Packers Won the Game on a Crazy Hail Mary Pass

Aaron Rodgers found Richard Rodgers for the game winning touchdown pass on Thursday Night Football. There was a facemask call that allowed one more play for the Packers with no time remaining. It was one of the most memorable plays of the NFL season.