The Villanova Wildcats are going to Houston.

After taking down the South’s top-seeded Kansas Jayhawks, the Wildcats, the region’s No. 2 seed, are back in the Final Four for the first time since 2009 and just the second time since 1985, their lone NCAA Tournament championship season.

So while the Wildcats prepare for their national semifinal matchup on Saturday, April 2, you can load up on the newest Villanova Final Four and March Madness gear thanks to online sports retailers Fanatics and FansEdge. Pick up the latest ‘Nova NCAA Tournament T-shirt or hat to show support for your favorite college squad.

All of the products on Fanatics and FansEdge are officially licensed and made of high quality materials. And not only do the sites carry Villanova March Madness apparel, but also have thousands of other Wildcats items for men, women and children, including shirts, jerseys, jackets, hats, hoodies and collectible memorabilia.

They ran through the Big East and now they’re running through the NCAA Tournament. The Villanova Wildcats are back in the Final Four for the first time since 2009 and for the fourth time in program history. If you’re a ‘Nova fan, Fanatics and FansEdge have all the newest March Madness gear as the Wildcats prep for their national semifinal game. Click the link below to get the latest Villanova NCAA Tournament T-shirt, hat or hoodie so you’re ready to cheer on the ‘Cats come Final Four weekend in Houston. 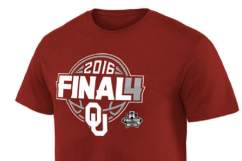 Let everyone know who you are pulling for in the 2016 Final Four and do it in style with Villanova Wildcats Basketball Practice Performance T-Shirt by Nike. Made of 100 percent polyester, the navy blue short sleeve T features Dri-FIT technology, which wicks away moisture quickly to keep you dry and cool. A perfect shirt to cheer on ‘Nova and for a workout of your own.

The 2016 Final Four is here, so be ready for it with the Trucker Adjustable Hat by Top of the World. The high crowned hat is made of 100 percent cotton on the crown and bill and 100 percent polyester on the rear panels. The structured fit, curved bill cap has a full-snap closure in the back, so it’s one size fits most.

Stay warm during March Madness with this NCAA 2016 Final Four Takeoff Pullover Men’s Hoodie. The midweight hoodie, made from 80 percent cotton and 20 percent polyester, is perfect for moderate temperatures. It features a front pouch pocket and a hood with drawstring. A perfect top for any college basketball fan.

The logo seen on the sweatshirt can also be found on T-Shirts. Click here to get the 2016 Final Four Short Sleeve T-Shirt, and click here to buy the Long Sleeve version of the shirt. All three items come in the color black.