T20 crowns a champion today in Kolkata, as England and West Indies make up an unlikely final. It should be an exciting matchup, as these two teams led the tournament in run rate and sixes, respectively. Today’s match is set to start at 9:30 a.m. Eastern.

Here’s all the details for today’s final:

Odds: It’s up in the air, as both England and West Indies are valued at -110

Live Stream: Click here for all the live stream information

After knocking off host country India in the semifinals, West Indies won’t get any love from the fans Eden Gardens in today’s T20 final against England. Both teams swatted their way to the final, with England leading all Super 10 teams with a 9.12 run rate. But England have struggled against West Indies in T20I, losing more to the islanders (4-9) than any other team.

The most recent of which was just over two weeks ago, when West Indies won by six wickets in Mumbai. That was the most recent loss for England, who have won four straight matches to make their finals run. But if they want to reverse the record, they’ll need to step up their bowling. An economy rate of 8.68 is worst among the tournament, and today they’ll go against a West Indies lineup that led all teams with 36 sixes in the tournament. 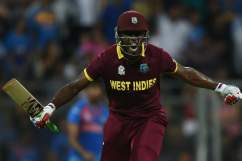 England vs. West Indies Live Stream: How to Watch Online