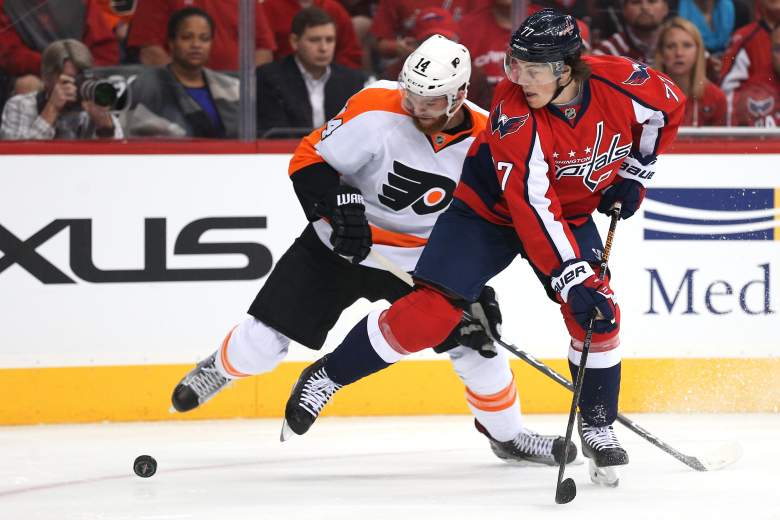 The Flyers and Capitals are primed for another physical, emotional battle in Game 2 on Saturday. (Getty)

The Philadelphia Flyers are dealing with a lot right now.

The Wild Card squad, whose late-season rally made them one of the hottest teams heading into the NHL playoffs, were held without a goal in Game 1 against the Washington Capitals on Thursday and, now, Philadelphia is trying to cope with a major injury as well.

Even so, there’s no time to stew on problems. Instead, it’s time to play some rivalry-fueled hockey and, this time, the Flyers are determined to be the ones delivering big hits and, most importantly, evening up the series.

Keep reading for a look the game details heading into tonight’s matchup, including odds and live streaming options:

Preview: The Flyers will be without center Sean Couturier tonight after he took a big-time hit from Washington’s Alex Ovechkin in the series opener on Thursday.

Brayden Schenn is expected to move from wing into Couturier’s role on the second line and while it’s a move Philadelphia would rather not have to make, it isn’t all bad either. Schenn played 80 games over the course of the regular season and scored 26 goals and 59 points – both an NHL career high.

“[Schenn’s] been able to do that for us throughout the year, so if we need to make that change I know he’ll be comfortable doing it,” Flyers coach Dave Hakstol told NHL.com. “He’s very comfortable in both of those spots, in fact, all three spots up front. …

The key for the Flyers tonight, however, isn’t fitting replacements into roles, it’s finding a way to get points on the board.

Washington goalie Braden Holtby will get the start again tonight after making 19 saves in his third NHL playoff shutout on Thursday. Holtby has been nothing short of dominant throughout the season and his record-breaking performance has been a bit of an under-the-radar mark on the Capitals’ collective success.

If Philadelphia can’t find an answer for Holtby, any other problem, injuries included, won’t seem nearly as important.

Read More
Hockey, NHL
There was plenty of emotion (and more than a few hits) in Game 1. Now it's time to get back on to the ice for more rivalry-fueled hockey. .