It’s a big game for USMNT, and it’s a big goal for Clint Dempsey.

They didn’t have much posession in the first 20 minutes against Ecuador, but a great ball from Jermaine Jones set Clint Dempsey up for the game’s first goal.

It’s a fitting start for Dempsey, who plays his club football locally with Seattle Sounders.

USA got this goal and another from Gyasi Zardes en route to a 2-1 victory. USMNT advance to their first Copa America semifinal since 1995.

Their opponent in the semifinal is still unknown. Argentina and Venezuela will battle for the second spot Saturday night at Gillette Stadium in Foxborough. 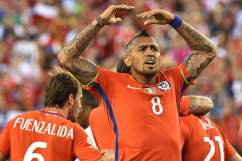