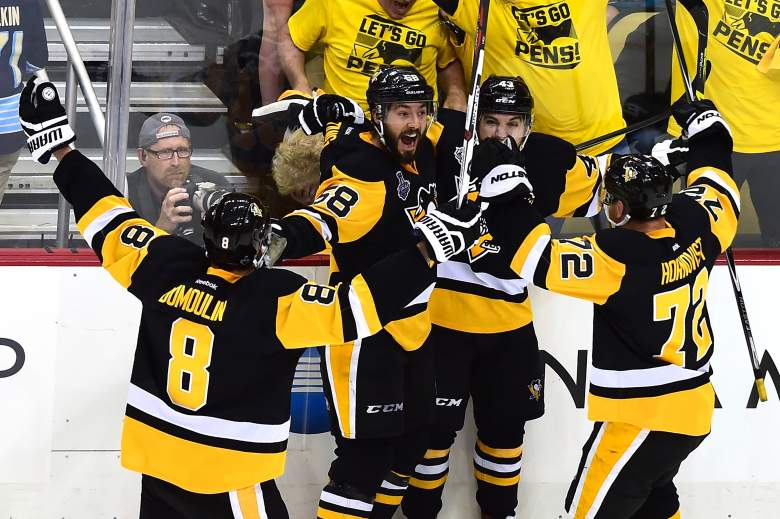 The Penguins look to close out the Stanley Cup Final with a win in San Jose on Sunday night. (Getty)

It was do-or-die for the San Jose Sharks in Game 5, and they rose to the occasion.

A record crowd of 18,680 fans poured into Consol Energy Arena on Thursday night. Many of them were already preparing for the celebration: to see Pittsburgh hoist the Cup for the ninth time in franchise history, and the first time on home ice.

However, the Sharks put off their party, defeating the Pittsburgh Penguins, 4-2 and forcing a return to San Jose.

As the series returns to SAP Center for a crucial Game 6, the Penguins hold a 3-2 series lead over the Sharks.

Getting off to another fast start will be key for the Sharks in Game 6. The Sharks opened the scoring in Game 5 for the first time in the series, thanks to defenseman Brent Burns.

He scored the first goal to give San Jose its first lead of the series. Burns was key for the Sharks throughout the game, contributing on both sides of the puck.

Sharks goaltender Martin Jones was once again, outstanding in Game 5, finishing with 44 saves, which is the most by a netminder in a Stanley Cup Final regulation game.

Logan Couture told ESPN that Jones has been a pillar for the Sharks’ success.

“He made some big-time saves. He’s been playing like this for a long time — regular season, playoffs. A lot of people, unfortunately, don’t get to see him, with us being on the West Coast. He’s been unbelievable for us.”

The Sharks, however, still struggled to contain the Penguins speed and puck possession.

Pittsburgh created plenty of opportunities to win Game 5, outshooting San Jose 46-22. However, they couldn’t create enough offensive momentum to pull through with a win.

Evgeni Malkin and Carl Hagelin contributed with two goals in the first period to tie the game 2-2.

For the Penguins to come away with a victory, they’ll need a solid performance from their rookie goaltender Matt Murray. Murray is coming off a lackluster performance in which he allowed three goals on 21 shots for an .857 save percentage in Game 5.

The Sharks have a chance to even the best-of-seven series at 3-3 on Sunday, while the Penguins look to close out the final, and head home with the Cup.