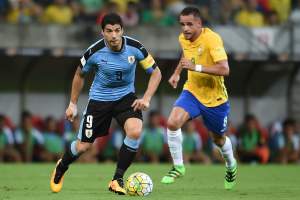 Uruguay fans received bad news after Luis Suarez was officially ruled out for their opening Copa America Centenario match against Mexico. There was speculation that Suarez might not be recovered in time, but fans held out hope prior to him being officially ruled out.

Suarez was injured in the Copa del Rey final last month. He appeared to pull up during the match with a hamstring injury. Here’s a look at the injury:

“Luis Suarez is completely ruled out of the game against Mexico. He’s a player that surprises you with his recovery, but he’s not ready. His injury only happened 14 days ago,” Tabarez told ESPN.

Uruguay’s next match takes place Thursday, June 9 against Venezuela. Venezuela leads Group C with 3 points after their victory over Jamaica.

According to FOX Sports, Tabaraz has not ruled Suarez out for Thursday’s match, but has not discussed a timetable for the star’s return.