There are other swimmers in the pool. Trust me. #Ledecky pic.twitter.com/XJIlMsucCH

Katie Ledecky shattered her own world record in the 800 freestyle at Rio with a performance so dominant that competitors were swimming in the other direction at one point.

The stunning victory on Aug. 12 gave Ledecky, 19, of Maryland, her fourth gold in Rio and fifth medal. It also had viewers and social media commentators amazed by the length of distance between Ledecky and her nearest competitor.

#Ledecky is gonna be warming up for her next race by the time the rest of them finish this race. pic.twitter.com/gNUqxL4KHx

Fox News came up with 11 “insane facts” to highlight how unusual Ledecky’s victory was; among them: “If you take the margin of victory in every single men’s race in Rio, the combined time is 6.66 seconds. Ledecky’s margin: 11.38 seconds.”

How dominant is Ledecky in the 800? What’s amazing is that she was already crushing the competition in the event, but she beat her own best time by so much.

“Ledecky already owned all of the top-10 times in the history of the 800 free, and this adds another layer to her dominance,” says Yahoo News. The Los Angeles Times says Ledecky “now holds the 13 fastest times ever in the event.” 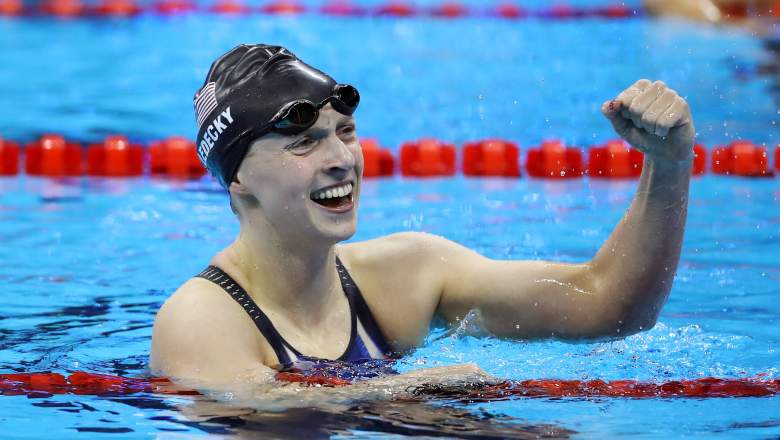 Katie Ledecky of the United States celebrates winning gold in the Women’s 200m Freestyle Final on Day 4 of the Rio 2016 Olympic Games at the Olympic Aquatics Stadium on August 9, 2016 in Rio de Janeiro, Brazil. (Photo by Al Bello/Getty Images)

Olympic medalist Ryan Lochte told Sports Illustrated after practicing with Ledecky in March. “Her stroke, her mentality: She’s so strong in the water. I’ve never seen a female swimmer like that. She gets faster every time she gets in, and her times are becoming good for a guy. She’s beating me now, and I’m, like, ‘What is going on?’”

What makes Ledecky so good? Sports Illustrated asked Dave Marsh, coach of the U.S. Olympic women’s team, for his theory, and he told the magazine: “I’ve experienced the passion and depth with which Katie trains and races. I’ve gone back and tried to figure out what causes it, because she doesn’t fit the model. She has a wonderful family, has everything, really, that she wants; she’s a beautiful person with seemingly no dark sides. But she has this energy stirring in her, not just at meets but at practice.” It’s that singular determination that stands out.

The New York Times said Ledecky became only the second woman in history (Debbie Meyer was the other in 1968) to win the 200, 400 and 800 at the same Olympics.

ESPN said Ledecky “beat her own world-record time by nearly two seconds to become the second woman in history to win the 200, 400 and 800 freestyle races at the same Olympics.”

#ledecky This was all I could think of. Amazing. pic.twitter.com/q8gs9qIIyS

Ledecky – the U.S. Olympic swimming team’s youngest member – completed the feat “with a flourish,” the Times said, “breaking her world record in the 800 with a clocking of 8 minutes 04.79 seconds.”

Showing Ledecky’s sheer dominance in the race: Her closest competitors’ times: Jazz Carlin was second at (8:16.17), and Boglárka Kapás was third at (8:16.37).

Ledecky is the defending Olympic champion in the event, according to NBC. At the 2012 Olympics, Ledecky only competed in the 800. She later won the event at the 2013 and 2015 World Championships, said NBC. She won her first gold medal at age 15 with a time 10 seconds slower than Aug. 12.

Ledecky’s USA Swimming bio says she is the current World Record holder in the 400m, 800m and 1500m free and is committed to swimming at Stanford University. Her mother and brother are also swimmers, the bio says.

Ledecky started swimming on a Washington D.C. team at age 6, meaning she became a gold medal winner within nine years.

Watch Ledecky’s London performance in the 800:

Katie Ledecky wins Olympic Gold – Women's 800m Freestyle | London 2012 Olympic GamesHighlights as USA's Katie Ledecky wins Gold in the Women's 800m Freestyle during the London 2012 Olympic Games. Swimming has featured on the programme of all editions of the Games since 1896. The very first Olympic events were freestyle (crawl) or breaststroke. Backstroke was added in 1904. In the 1940s, breaststrokers discovered that they could…2012-08-03T20:13:16.000Z

On social media, people reacted to the jaw dropping lead, which at one point had Ledecky and competitors swimming in opposite directions:

That time you are so fast everybody else in the pool is swimming the other way. pic.twitter.com/BCPq2mWbLq #Rio2016 #Ledecky

Kate Ledecky is arguably the best female swimmer in the world, and proof we don't value our female athletes enough. #Ledecky.

#Ledecky should just race a hologram ghost of herself, like Mario Kart. #Rio2016

I think #Ledecky was already on the medal podium before the other swimmers even finished the 800m free. Just amazing. #America #AnotherGold

When you're taking a relaxing bath. All alone…#Katie #Ledecky pic.twitter.com/sSavI9bPnF 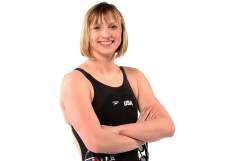 Read More
2016 Olympics, Breaking News, Rio Olympics 2016, Swimming
Katie Ledecky broke her own world record in the 800M Freestyle, becoming the second woman in history to win the 200, 400 and 800 in the same Olympics.