With millions of Americans celebrating Labor Day this Monday, a lot of shows are taking the week off, not airing any new episode on Sunday or Monday evening. Is WWE’s Monday Night Raw one of those shows? Will its employees be taking a day off tonight?

In fact, Monday Night Raw is one of the rare shows on television that skips virtually no episodes. This past summer, the 4th of July fell on a Monday, but did Raw take the night off? Nope; a special Fourth of July episode aired that evening, though it received relatively poor ratings since the majority of fans were out at parties.

Here’s some more information about tonight’s Monday Night Raw and when it will be broadcast.

TV CHANNEL: USA Network. Check your local TV provider to see what channel USA is in your area.

So what do we have to look forward to on tonight’s Raw? Well, it should actually be a pretty important episode, as Kevin Owens will make his debut as WWE Universal Champion, and Seth Rollins will respond to Triple H’s betrayal during last week’s Fatal 4-Way match.

For live match results and spoilers during the event, check out our coverage of the episode, which will begin at 8:00 tonight: 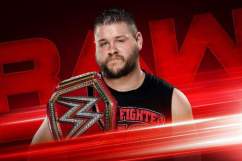