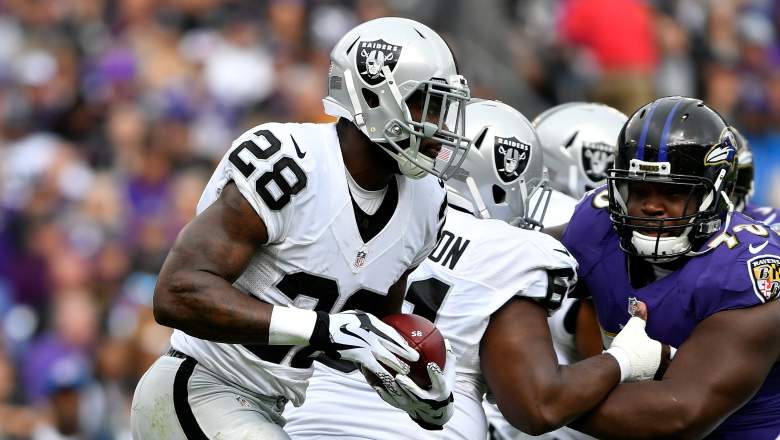 Raiders running back Latavius Murray is out for Week 5 with a toe injury. (Getty)

The answer is officially “no.”

The Panthers quarterback suffered a concussion in Week 4’s loss to the Falcons and didn’t practice all week, including Saturday. He was ruled out early Saturday afternoon.

Backup Derek Anderson will get the start when Carolina hosts the Tampa Bay Buccaneers.

NFL teams announce their inactive players usually about an hour and a half before their games. So if the game starts at 1 p.m. ET, the inactive lists will be released around 11:30 a.m.

Check back here as this post will be updated as more injury information becomes available.

Here are the rest of the big-name players who are battling injuries in Week 5:

Jay Cutler, Bears (DOUBTFUL) — Cutler won’t play. And with the way Brian Hoyer is playing, Cutler might not play again this year.

Trevor Siemian, Broncos (OUT) — Battling a non-throwing shoulder injury (left), Siemian is not going to play Sunday at home against the Falcons, which an incredibly juicy matchup. It’ll be rookie Paxton Lynch under center and he makes a great sleeper play.

Latavius Murray, Raiders (OUT) — Murray has turf toe, which is an injury that can linger. The Raiders backfield will be a rotation between DeAndre Washington and Jalen Richard. If you have to pick one, I’d go with Washington over Richard for Sunday’s matchup against the Chargers, who have allowed 7 rushing touchdowns.

Doug Martin, Buccaneers (DOUBTFUL) — Martin (hamstring) is listed as doubtful, but he’s almost guaranteed to be out Monday night vs. the Panthers. His backup, Charles Sims, is also doubtful for Week 5 with a knee injury. Next up: Jacquizz Rodgers and Peyton Barber. Meh.

Jonathan Stewart, Panthers (OUT) — Stewart (hamstring) is at least another week away from playing. Cameron Artis-Payne and Fozzy Whittaker will shoulder the load vs. the Bucs on Monday Night Football. They are FLEX options at best, but I like Whittaker better.

Arian Foster, Dolphins (DOUBTFUL) — Foster (hamstring) is officially doubtful, which is unofficial for “OUT.” It’ll likely be the gruesome twosome of Jay Ajayi and Kenyon Drake against the Titans. They have completely underwhelmed. Maybe give Damien Williams a few more touches? Avoid this situation.

Rashad Jennings, Giants (QUESTIONABLE) — Jennings (thumb) is listed as questionable, but is expected to miss Sunday night’s game at Green Bay. Orleans Darkwa, Paul Perkins and Bobby Rainey will handle the rock against the Packers’ top-ranked rush defense. No thanks.

Eric Decker, WR, Jets (OUT) — Decker is out with a bum shoulder and is considered week to week. Quincy Enunwa, who is starting in place of Decker, was added to the injury report with a knee injury. Though, he’ll likely play against a vulnerable Steelers secondary. Robby Anderson and Charone Peake would be the beneficiaries if Enunwa is out.

Dez Bryant, Cowboys (QUESTIONABLE) — Dez missed Week 4 with a knee injury and while he’s listed as questionable, he isn’t expected to play against the Bengals. Err on the side of caution and sit Bryant, who would have a tough time against Cincinnati if healthy. Brice Butler is my sleeper Cowboys receiver for the week.

Julian Edelman, Patriots (QUESTIONABLE) — Edelman has been limited in practice with a foot injury, but do you think he’s going to sit in Tom Brady’s first game back from suspension? Yeah, I didn’t think so either. Edelman will probably be on the injury report the entire year. Still, if Edelman is out, I’d jump all over Chris Hogan. UPDATE: As expected, Edelman will play. So will tight end Rob Gronkowski.

Stefon Diggs, Vikings (OUT) — Diggs is all but out against the Texans with a groin injury. Houston has a stout pass D, so Diggs was a bench candidate for fantasy teams anyway. Adam Thielen, Charles Johnson, and, to a lesser extent, Cordarrelle Patterson will see an uptick in playing time if Diggs is done. UPDATE: Diggs is officially out. Thielen will get the start in his place. Thielen is nothing more than a WR4.

Eddie Royal, Bears (QUESTIONABLE) — Royal didn’t practice all week with a calf injury, but coach John Fox called him a dreaded game-time decision. Frustrating as Royal is coming off a huge game and has a great matchup vs. the Colts. If Royal plays, he’s a solid sleeper option. UPDATE: Royal is active, as is Alshon Jeffery and tight end Zach Miller. All three make very good plays vs. the vulnerable Colts. Especially with the way Brian Hoyer has been throwing.

Eric Ebron, Lions (OUT) — Ebron (ankle/knee) is out again. Not good news for Matthew Stafford and the passing game against the studly Eagles defense.

Tyler Eifert, Bengals (OUT) — Eifert was set to return to the lineup in Week 5 after missing the first quarter of the season with a knee injury. Now he has a back injury and won’t play against the Cowboys. Sigh. It’ll be C.J. Uzomah and Tyler Kroft in his place. Use Uzomah first and only if you’re desperate. Shouldn’t be that desperate, though.

Antonio Gates, Chargers (QUESTIONABLE) — It wouldn’t be a complete injury report without Antonio Gates’ name on it. Gates (hamstring) will try to give it a go against the Raiders, who have a very generous defense. But there is a changing of the guard going on San Diego at the tight end position as rookie Hunter Henry has the full confidence of QB Philip Rivers. With so many receivers on the shelf for the Chargers, both Gates and Henry make good plays vs. Oakland. Henry is a better choice, though. UPDATE: Gates is expected to play, but will likely be on a limited snap count.