We're onto Week 17 in the NFL, and if you're still playing in your season-long fantasy football league, there's both good and bad news. The good--you're in the championship. Yay! The bad--Week 17 is by far the most unpredictable week of the regular season. With some teams already locked into their playoff spot, others "playing" for a better draft pick and others still competing for playoff positioning, motivation will be at varying levels throughout the league, and there's a chance some of the players who got you to the championship will be getting a well-deserved rest this week. Four teams--Dallas Cowboys, New York Giants, Pittsburgh Steelers and Houston Texans--have nothing to play for in Week 17 and are thus candidates to sit their stars, while other teams could be difficult to predict. Fortunately, the same situation creates opportunity for lesser-owned players to help you out. You can click through the gallery for my favorite sleepers to start and potential busts to bench, or you can read here for more fantasy analysis and DFS strategy. (Getty) 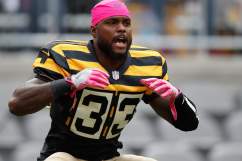