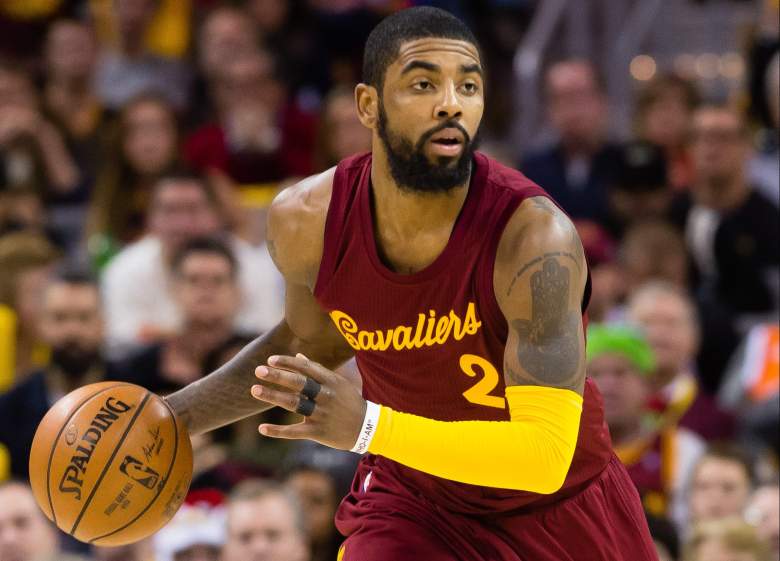 The first meeting this season between the Golden State Warriors and Cleveland Cavaliers lived up to the hype, with a Kyrie Irving fadeaway with 3.4 seconds remaining giving Cleveland a 109-108 victory. Irving, who scored just five points in the first half, scored 16 points in the final quarter as the Cavs erased a 14-point fourth quarter deficit. Irving finished with 25 points, ten assists, seven steals and six assists, with LeBron James leading the Cavaliers with 31 points, 13 rebounds, four assists and two steals. Kevin Love added 20 points and six assists, and Channing Frye scored ten points off the bench.

Kyrie hits the game-winner as the @cavs rally to beat the @warriors, 109-108. #NBAXmas pic.twitter.com/XcEHeDKxOy

In his first game playing against the Cavs as a member of the Warriors, Kevin Durant finished with game highs of 36 points and 15 rebounds. But after getting off to a very efficient start he was slowed down in the fourth quarter, with Cleveland’s Richard Jefferson being the primary defender. Durant had the ball in his hands on the final possession of the game, but lost his balance (some would say he was tripped by Jefferson) and could only get off a desperate one-handed toss towards the basket as time expired.

Klay Thompson added 24 points, Draymond Green 16 and Stephen Curry 15 as Golden State dropped to 27-5 on the season. With the win, Cleveland is now 23-6. Below are recaps from throughout the game along with some highlights.

(6:55 remaining) While the first five-plus minutes haven’t lacked for activity, both teams are struggling to find their rhythm offensively. Golden State’s shooting 3-for-6 from the field, but they also have four turnovers with Draymond Green responsible for two of them. Cleveland’s struggles have been in the shooting department, as they’re just 2-for-10 from the field. Green picked up two quick fouls and was assessed a technical foul before heading to the bench. Kevin Durant leads the Warriors with four points, and Cleveland’s Kevin Love has five points to lead all scorers.

On ESPN, Love is feeling it early for #NBAXmas!#NBARapidReplay pic.twitter.com/MyuJIt84aS

Nobody ever getting Kyrie's belt. YACK EM ?? https://t.co/jcL1bhwpkW

(2:47 remaining) Durant continued his solid start to the game, as he’s now up to 12 points (6-for-6 FT, 3-for-5 FG). Golden State’s 0-for-6 from three, and given how well they’ve shot on the season that shouldn’t be an issue for all 48 minutes. As for Cleveland, LeBron James is up to six points, with Love and Kyrie Irving having seven and five, respectively.

(8:04 remaining) With Stephen Curry struggling offensively, others have stepped forward as the Warriors have established an eight-point lead. David West has contributed five points and four assists off the bench, and Klay Thompson has scored 13 points. Golden State’s shooting 50 percent from the field while Cleveland is shooting 33 percent. Cleveland’s managed to stay close, but they’ll need to get better from the field as the Warriors get things going offensively.

(Halftime) After falling behind by ten, Cleveland went on a 10-0 run to tie the score at 50-all. Golden State would score five of the final seven points of the half to take a three-point lead into the break, with Durant leading all scorers with 17 points while also grabbing eight rebounds. Thompson is the only other Warrior in double figures with 13 points, and Curry has six points on 1-for-5 shooting from the field.

As for Cleveland LeBron already has a double-double, as he tallied 11 points and ten rebounds in the first half. Love leads the way scoring-wise with 14 points, and Irving added nine points. Also of note for Cleveland was the play of Channing Frye, who shot 4-for-5 from the field in scoring ten points. Cleveland’s offensive rebounding, as they have 13, has kept them within striking distance despite their shooting 32 percent from the field.

Love connects for his second trey ball on ABC!#NBARapidReplay pic.twitter.com/7vICslm8pa

(6:28 remaining) James has scored nine points in the quarter for the Cavs, and he now has totals of 20 points, 12 rebounds and three assists. Love is next in line offensively with 18 points to go along with three rebounds and two assists. Tristan Thompson’s been very active on the boards, grabbing eight rebounds with six being of the offensive variety. For Golden State, Durant continues to lead all scorers as he’s got 24 points, and Thompson’s added 16. Durant, who’s shooting 7-for-11 from the field, also has nine rebounds and two assists. Curry continues to struggle offensively, as he has eight points on 2-for-8 shooting.

(End of quarter) James continued on his run, scoring 16 points in the quarter. But his efforts weren’t enough to keep Golden State from grabbing control of the game. Durant’s still got it rolling offensively, as he’s up to 28 points to go along with ten rebounds and two assists, and Thompson’s added 22 points. And the Warriors received quality contributions from Green, who’s now up to ten points, four rebounds and three assists after getting off to a slow start. Golden State’s shooting just 33.3 percent from three through the first three quarters, but they’re shooting nearly 66 percent on two-pointers.

With James getting his customary rest at the start of the fourth, Golden State continued to pull away as Cleveland went nearly four minutes without a point. Durant’s been nearly unstoppable offensively, as he’s now up to 34 points to go along with 12 rebounds. Cleveland’s first points of the quarter were scored by Richard Jefferson, who dunked on Durant. Jefferson was given a technical foul following the play for taunting Durant.

(1:43 remaining) Cleveland not only got back into the game but eventually took the lead, with Jefferson and Irving providing the needed spark. Irving’s now scored 20 points on the game after having just five at halftime to go along with six rebounds and ten assists. Irving’s most recent assist came on a James two-handed dunk on Green to give Cleveland a 105-103 lead. Golden State argued that James should have been given a technical foul for hanging on the rim, but none was called. 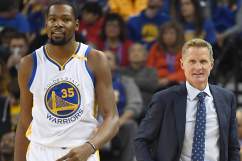 Warriors-Cavaliers Live Stream: How to Watch Online for Free