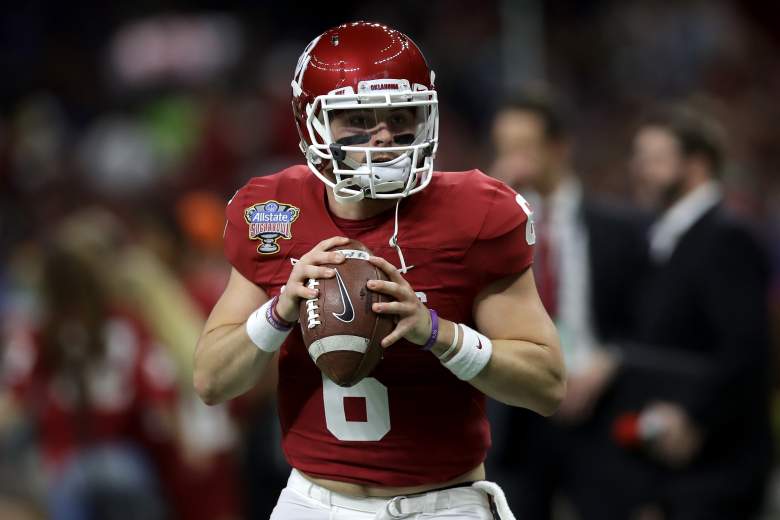 Baker Mayfield is returning to Oklahoma for the 2017 season. (Getty)

Fans of Baker Mayfield’s game will have to tune into Oklahoma games for another season as Mayfield is returning to Norman for the 2017 season. Mayfield likely would have been battling to be a late-round selection and will look to improve his draft stock for the 2018 NFL Draft.

Walter Football has him as the fifth rated quarterback of the 2018 class. He is likely to move up the rankings once players like Deshaun Watson announce their 2017 draft intentions. Walter Football notes that his pocket passing must improve for him to improve his draft stock. Mayfield is listed at 6’1″ and 210 pounds.

“Mayfield is one of the most creative players in college football. He’s also been very efficient over the last half of the season. His playing style reminds me of Johnny Manziel’s at Texas A&M and Chase Daniel’s at Missouri. His lack of size (6-foot-1, 212 pounds, per school measurements) and pure arm talent will temper the enthusiasm of NFL evaluators, but he’s a special player at the college level. He’s coming back to school for his senior season and I think that’s the right move for him. He needs to continue to get stronger as he goes through his final season.”

There are things to like about Mayfield’s game. He is a dual-threat quarterback and can hurt opposing defenses with his legs. Mayfield has the swagger and competitive spirit that NFL teams are looking for at quarterback. His unorthodox throwing motion along with his pocket presence are cause for concern.

Mayfield has another year to polish his game. The challenge will be competing with other quarterbacks like UCLA’s Josh Rosen, Washington State’s Luke Falk and Oklahoma State’s Mason Rudolph who will all be potentially entering next year’s draft.

He had a solid 2016 campaign on a surging Sooners team. Mayfield was 235-of-330 completing 71.2 percent of his passes for 3,669 yards, 38 touchdowns and 8 interceptions. He also had 143 yards rushing and 6 rushing touchdowns. His 2015 rushing stats were higher with 405 rushing yards and 7 touchdowns. Mayfield started his career at Texas Tech where he played eight games before transferring to Oklahoma.

Read More
College Football, Football, NFL
Baker Mayfield will not be heading to the NFL Draft until 2018. There is still plenty of discussion about Mayfield's game and how it translates to the NFL.