As head coach at Alabama, Nick Saban has always ensured his team has the nation’s top talent. That includes running back Bo Scarbrough, a local recruit that is crucial to Alabama’s 2017 title hopes. Listed at over six feet tall and 230 pounds, Scarbrough has a special combination of power and speed. Luckily for Crimson Tide fans, Scarbrough has already declared his intentions to return to school next season.

Here are the facts on Scarbrough:

1. Scarbrough Continues a Tradition of Physical NFL-Ready Backs at Alabama

He’s only a Sophomore, but NFL teams are already salivating at Scarbrough’s potential. Scarbrough is three years removed from high school and is draft-eligible, but is returning to school for his Junior season. He’s the latest in a tradition of powerful backs at Alabama, most of whom went on to have successful NFL careers.

The most recent was Derrick Henry, who rushed for over 3,500 yards from 2013-15 at Alabama. Scarbrough moved into the starting role after Henry was selected 45th overall in the 2016 NFL Draft. Before Henry it was T.J. Yeldon and Eddie Lacy, both of whom are contributing for NFL teams. 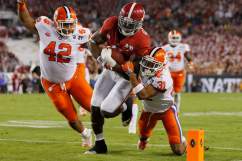 2. He Recruited Other Players in High School to Alabama Before Committing

Scarbrough gained notoriety as a recruit while playing at Northridge High in Tuscaloosa and IMG Academy in Florida, but returned home to Tuscaloosa County High to finish high school. He had committed to Alabama in his Junior year, but considered switching to Ole Miss or Florida State before signing his letter of intent.

At his signing conference, Scarbrough revealed that he had been rallying other top-ranked recruits to sign with Alabama.

“I actually recruited Rashaan Evans and Da’Shawn Hand and Reuben Foster and Dee Liner and I can keep going and keep going,” Scarbrough told Tuscaloosa News. “I’m real good friends with all those guys, and to be a part of something like this is a blessing.”

Evans, Hand and Foster are all considered to be NFL prospects. Liner transferred to Arkansas State.

Before the College Football Playoff, Scarbrough still wasn’t getting national recognition. That changed by the final whistle, as Scarbrough put on a performance for the ages. He finsiehd with an Alabama bowl record 180 rushing yards, and scored Alabama’s only two offensive touchdowns.

It wasn’t just Scarbrough’s biggest yardage total. With Lane Kiffin and Jalen Hurts running a dynamic offense, Scarbrough had never had more than 17 touches in a game before the semifinal. After only 18 touches in the 2015 season, including zero in last year’s National Championship, Scarbrough still didn’t get a consistent workload this season. In seven games this season he had less than ten carries, and ended the regular season with only 90 carries.

While Bo was a highly-touted recruit, it took longer than expected to get him going. At the start of the 2015 season, Nick Saban announced that Scarbrough was suspended for the first four games of the season. The suspension was related to amateurism, and Scarbrough wasn’t even ready to get back onto the field. Scarbrough was still rehabbing a knee injury, and it was the reason he spent most of the season on the sidelines.

With Kenyan Drake and Derrick Henry in the backfield, there wasn’t any urgency to get Scarbrough on the field. Togther, Drake and Henry combined for just under 3,000 scrimmage yards and 30 touchdowns.

5. He Averages Over Six Yards Per Carry

It’s been proven that with Alabama’s offensive line, any running back will be able to find success. Scarbrough is different because regardless of the line, he has the power and speed to succeed at any level. 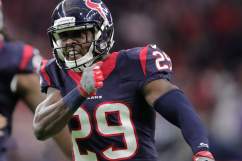