Nine games are on the NBA schedule for Monday night, giving FanDuel participants a host of options to consider when putting together their rosters. One quality matchup to keep an eye on is Washington's trip south to take on Southeast Division rival Charlotte, with the game boasting two of the NBA's top point guards. Washington's John Wall ($9,700) is averaging 45 FanDuel points per game on the season, a number he's surpassed in two of the last three games. While Wall's 58.5 FanDuel point outing against the Knicks Thursday night was the better of the two 45-plus point performances, he tallied 48.9 FanDuel points against a Memphis team that's far better defensively than the Knicks.

He'll run into another solid defensive team in the Hornets on Monday, and Charlotte point guard Kemba Walker can make Wall work defensively as well. Walker ($7,900) is averaging 36.7 FanDuel points per game, but he's failed to reach that mark in three of the last five games. Walker was solid in the first meeting with the Wizards, tallying 17 points, nine assists and six rebounds, but Wall was even better with 25 points, ten assists, seven steals and six rebounds as Washington won by three. Both players are capable of taking over a game when needed, and that could very well be the case for both Monday night.

Here are our FanDuel picks for Monday, using a $60,000 salary cap for a nine-player roster. Stats used are courtesy of Basketball Reference. (Getty) 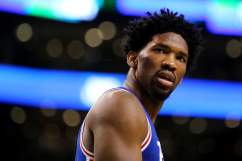