Once again the pickings are slim for FanDuel participants, with there being just five games on the NBA schedule for Tuesday. And the unquestioned top option is Houston guard James Harden, who has a value of $12,300 and is the only player with a five-figure salary cap number. Harden's averaging 53.7 FanDuel points per game on the season, and in the Miami Heat he'll be up against a team that's done a solid job defensively this season. Ranked ninth in scoring defense and 14th in defensive rating, the Heat have allowed just 29.3 FanDuel points per game to opposing shooting guard (Harden's listed position) units over their last five according to Rotowire.

But when evaluating how teams defend Harden, one has to consider the defending of the point guard position. Over their last five games, Miami has allowed opposing point guard units to score an average of 52.2 FanDuel points per game. That bodes well for Harden, given the aforementioned average and the fact that he runs the show in Mike D'Antoni's offense. With that being the case, it wouldn't come as a surprise if Harden tallied his 14th triple-double of the season Tuesday night. Here are our picks for Tuesday's games, using a nine-player roster and a $60,000 salary cap. (Getty) 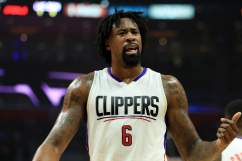